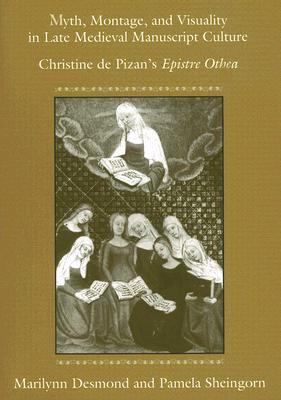 Medieval manuscript culture organizes reading as a visual experience. Early fifteenth-century Paris saw a proliferation of luxury manuscripts whose illuminations situate the reader as spectator. Christine de Pizan understood this visual aspect of medieval texts and exploited it throughout her work. The Epistre Othea (or Letter of Othea, dated about 1400) exemplifies the visual potential of medieval literature to enhance the reading experience.
Myth, Montage, and Visuality in Late Medieval Manuscript Culture, as a study of this visuality, draws extensively on film theory, which offers critical categories for the structures of spectatorship. The authors argue that premodern and postmodern cultures share a predilection for the cinematic arrangement of knowledge in a montage format. Their book explores the competing models for the study of visual cultures represented by the work of Erwin Panofsky and Aby Warburg and argues that the latter's Mnemosyne offers the most productive method for analyzing the Epistre Othea.
Marilynn Desmond is Professor of English, Binghamton University.
Pamela Sheingorn is Professor of History, Medieval Studies, and Theatre, Graduate Center, the City University of New York.