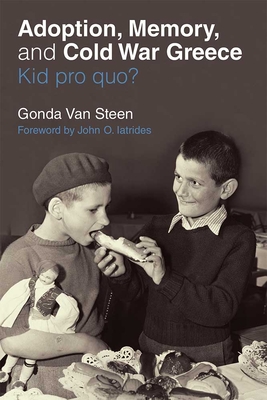 By Gonda Van Steen
Email or call for price & availability

This book presents a committed quest to unravel and document the postwar adoption networks that placed more than 3,000 Greek children in the United States, in a movement accelerated by the aftermath of the Greek Civil War and by the new conditions of the global Cold War. Greek-to-American adoptions and, regrettably, also their transactions and transgressions, provided the blueprint for the first large-scale international adoptions, well before these became a mass phenomenon typically associated with Asian children. The story of these Greek postwar and Cold War adoptions, whose procedures ranged from legal to highly irregular, has never been told or analyzed before. Adoption, Memory, and Cold War Greece answers the important questions: How did these adoptions from Greece happen? Was there any money involved? Humanitarian rescue or kid pro quo? Or both? With sympathy and perseverance, Gonda Van Steen has filled a decades-long gap in our understanding, and provided essential information to the hundreds of adoptees and their descendants whose lives are still affected today.

Gonda Van Steen is Koraes Chair of Modern Greek and Byzantine History, Language and Literature, and Director of the Centre for Hellenic Studies at King’s College London.

“[Van Steen] has opened a revealing window into the politics, culture, and social practices that predominated in postwar Greece… the author contributes to the nation's collective memory valuable insights into the impact of the civil war upon its most innocent victims. Combining meticulous scholarship with empathy, this seminal study of the selection of children for foreign adoption during the 1950s and 1960s has earned Gonda Van Steen the lasting gratitude of all students of contemporary Greece.”
—From the Foreword by John O. Iatrides