The Morality of Laughter (Hardcover) 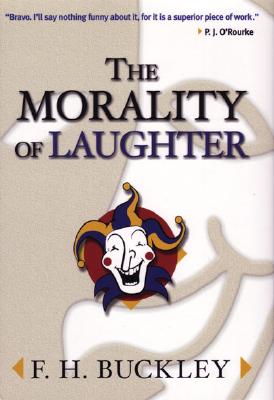 The Morality of Laughter (Hardcover)

“Bravo! I’ll say nothing funny about it, for it is a
superior piece of work.”
—P. J. O’Rourke

“F. H. Buckley’s The Morality of Laughter is at once
a humorous look at serious matters and a serious
book about humor.”
—Crisis Magazine

“Buckley has written a . ne and funny book that will
be read with pleasure and instruction.”
—First Things

“. . . at once a wise and highly amusing book.”
—Wall Street Journal Online

“. . . a useful reminder that a cheery society is a
healthy one.”
—Weekly Standard

"F. H. Buckley's The Morality of Laughter is at once a humorous look at serious matters and a serious book about humor."
—Thomas S. Hibbs, Boston College, Crisis Magazine, May 2003

"Buckley has written a fine and funny book that will be read with pleasure and instruction."
—Dermot Quinn, Seton Hall University, First Things, August-September 2003

". . . a fascinating philosophical exposition of laughter. . . . In what he describes as a 'very conservative' project, Buckley outlines the role of laughter in strengthening the virtues, and also in correcting vices (including the overreaches of fashionable intellectuals)."
—Michael Potemra, National Review

"One of the most engaging aspects of this book is Buckley's revelation of humor in unexpected places. . . . Despite its philosophical aims, The Morality of Laughter abounds with amusing anecdotes and observations."
—Laurie Morrow, National Review Online, May 8, 2003

"There are so many good things in this book, but I'm not sure they really need to be placed in an overall theory. If one is needed, then the superiority theory is as good as any and it has the merit of being a goad to egalitarians. . . . The author does not need his theory to achieve what the book achieves, which is to confront us with the neglected importance of humor. This is really his theme and his treatment of it is a triumph. Laughter is crucial for the good life and the good society. And there is laughter to be had while reading the book."
—Digby Anderson, Social Affairs Unit, London, New Criterion, September 2003

"Mr. Buckley shows that laughter is not simply a physiological tic or a vacation from earnestness. On the contrary, it is a potent civilizing force, binding together jester and audience, on one side, and upbraiding the butt or victim of the joke on the other. . . . [H]e deftly dramatizes the humanizing potential of humor: its ability to expose hypocrisy and other 'comic vices' even as it nurtures a variety of 'comic virtues,' not least a supple sense of the appropriate. . . . The Morality of Laughter is at once a wise and highly amusing book."
—Roger Kimball, Wall Street Journal Online, June 3, 2003