The Importance of Being Earnest (Paperback) 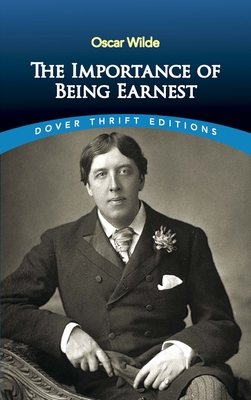 The Importance of Being Earnest (Paperback)


Available in Warehouse. Wait for Email Confirmation for ETA
This book cannot be returned, cancelled, or exchanged. Please call for availability and pricing
Here is Oscar Wilde's most brilliant tour de force, a witty and buoyant comedy of manners that has delighted millions in countless productions since its first performance in London's St. James' Theatre on February 14, 1895. The Importance of Being Earnest is celebrated not only for the lighthearted ingenuity of its plot, but for its inspired dialogue, rich with scintillating epigrams still savored by all who enjoy artful conversation.
From the play's effervescent beginnings in Algernon Moncrieff's London flat to its hilarious denouement in the drawing room of Jack Worthing's country manor in Hertfordshire, this comic masterpiece keeps audiences breathlessly anticipating a new bon mot or a fresh twist of plot moment to moment.
Poet and playwright Oscar Wilde (1854-1900) remains best known for his comedies of the 1890s, including The Importance of Being Earnest, and for his tragic imprisonment and untimely death.