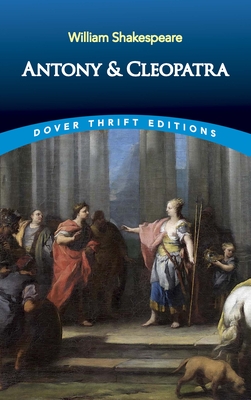 
This title is likely unavailable. Email or call for price and availability.
In this extraordinary play, one of Shakespeare's finest tragedies, a once-great general finds himself torn between his duty to the Roman Empire and his passionate attachment to Cleopatra, the alluring Queen of the Nile. In depicting the collision of two contrasting cultures -- Antony's world of political conniving and the hedonistic pleasures of Cleopatra's court -- the playwright portrays a timeless paradox of human nature, the quest for seemingly irreconcilable goals.
The action of the play ranges from Alexandria and Rome to Syria and Athens, from the rugged quarters of military camps to the luxurious atmosphere of the Egyptian court. In the latter milieu Antony lingers, shamed by his overwhelming passion for Cleopatra yet irresistibly drawn toward love as a source of vitality and renewal. After ignoring increasingly urgent demands by his co-ruler, Octavius Caesar, for his return to Rome, Antony reluctantly obeys at last, marrying Octavius's sister and forming a fragile political alliance. This bond shatters when he returns to Cleopatra's side. Octavius declares war on the lovers, forcing them into a battle for world domination with dramatic and unforgettable consequences.
Brimming with Shakespeare's matchless poetry, Antony and Cleopatra is one of the world's great plays. In this inexpensive edition, it will enthrall students of drama and literature, poetry lovers, and all who appreciate Shakespeare's art.

He was not of an age, but for all time, declared Ben Jonson of his contemporary William Shakespeare (1564-1616). Jonson's praise is especially prescient, since at the turn of the 17th century Shakespeare was but one of many popular London playwrights and none of his dramas were printed in his lifetime. The reason so many of his works survive is because two of his actor friends, with the assistance of Jonson, assembled and published the First Folio edition of 1623.