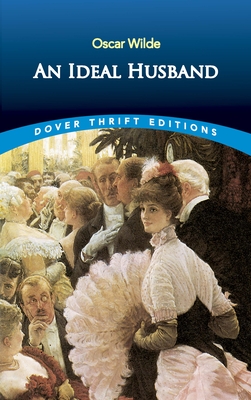 Although Oscar Wilde (1854-1900) created a wide range of poetry, essays, and fairy tales (and one novel) in his brief, tragic life, he is perhaps best known as a dramatist. His witty, clever drama, populated by brilliant talkers skilled in the art of riposte and paradox, are still staples of the theatrical repertoire.
An Ideal Husband revolves around a blackmail scheme that forces a married couple to reexamine their moral standards -- providing, along the way, a wry commentary on the rarity of politicians who can claim to be ethically pure. A supporting cast of young lovers, society matrons, an overbearing father, and a formidable femme fatale continually exchange sparkling repartee, keeping the play moving at a lively pace.
Like most of Wilde's plays, this scintillating drawing-room comedy is wise, well-constructed, and deeply satisfying. An instant success at its 1895 debut, the play continues to delight audiences over one hundred years later. An Ideal Husband is a must-read for Wilde fans, students of English literature, and anyone delighted by wit, urbanity, and timeless sophistication.

Poet and playwright Oscar Wilde (1854-1900) remains best known for his comedies of the 1890s, including The Importance of Being Earnest, and for his tragic imprisonment and untimely death.