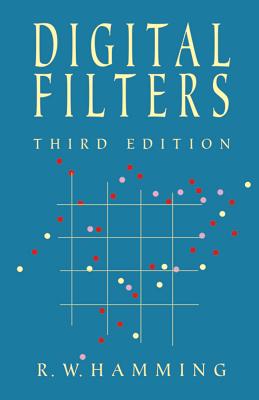 Digital signals occur in an increasing number of applications: in telephone communications; in radio, television, and stereo sound systems; and in spacecraft transmissions, to name just a few. This introductory text examines digital filtering, the processes of smoothing, predicting, differentiating, integrating, and separating signals, as well as the removal of noise from a signal. The processes bear particular relevance to computer applications, one of the focuses of this book.
Readers will find Hamming's analysis accessible and engaging, in recognition of the fact that many people with the strongest need for an understanding of digital filtering do not have a strong background in mathematics or electrical engineering. Thus, this book assumes only a knowledge of calculus and a smattering of statistics (reviewed in the text). Adopting the simplest, most direct mathematical tools, the author concentrates on linear signal processing; the main exceptions are the examination of round-off effects and a brief mention of Kalman filters.
This updated edition includes more material on the z-transform as well as additional examples and exercises for further reinforcement of each chapter's content. The result is an accessible, highly useful resource for the broad range of people working in the field of digital signal processing.

Richard W. Hamming: The Computer Icon Richard W. Hamming (1915-1998) was first a programmer of one of the earliest digital computers while assigned to the Manhattan Project in 1945, then for many years he worked at Bell Labs, and later at the Naval Postgraduate School in Monterey, California. He was a witty and iconoclastic mathematician and computer scientist whose work and influence still reverberates through the areas he was interested in and passionate about. Three of his long-lived books have been reprinted by Dover: Numerical Methods for Scientists and Engineers, 1987; Digital Filters, 1997; and Methods of Mathematics Applied to Calculus, Probability and Statistics, 2004. In the Author's Own Words: The purpose of computing is insight, not numbers. There are wavelengths that people cannot see, there are sounds that people cannot hear, and maybe computers have thoughts that people cannot think. Whereas Newton could say, 'If I have seen a little farther than others, it is because I have stood on the shoulders of giants, I am forced to say, 'Today we stand on each other's feet.' Perhaps the central problem we face in all of computer science is how we are to get to the situation where we build on top of the work of others rather than redoing so much of it in a trivially different way. If you don't work on important problems, it's not likely that you'll do important work. -- Richard W. Hamming