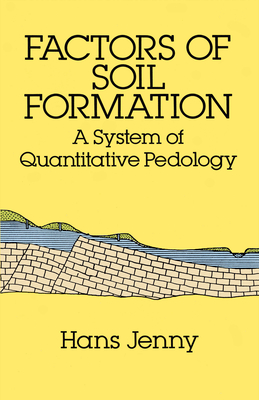 
This title is likely unavailable. Email or call for price and availability.
Hans Jenny's ... oeuvre ranks among those of the giant in the earth sciences. Even within this rarefied atmosphere of intellectual achievements, his book Factors of Soil Formation stands out as a masterpiece. -- from the Foreword by Ronald Amundson, University of California at Berkeley
Hans Jenny (1899-1992), who taught at the University of California at Berkeley for 31 years, was a world authority on soils and soil formation. Factors of Soil Formation, his most influential work, is an advanced treatise on theoretical soil science. It has been said that this book, long considered a masterpiece of scientific methodology, had as great an impact on soil science as Charles Darwin's The Origin of Species had on the study of evolution.
The book offers both a detailed discussion of the nature of the earth's terrestrial environment and a method of subdividing and studying it. The first two chapters are devoted to definitions and concepts, and methods of presentation of soil data. Chapters 3 through 7 explore the roles of time, parent material, topography, climate and organisms in the formation of soil. Chapter 8 presents conclusions.
Though it was written more than 50 years ago, Factors of Soil Formation has not been superseded, nor has Jenny's theory of how soils and ecosystems form been replaced by new factorial theories. Students and professionals working in the fields of pedology, geology and ecology will find this clear, concise study, filled with many of Professor Jenny's own illustrations, stimulating reading.