History of the Peloponnesian War (Paperback) 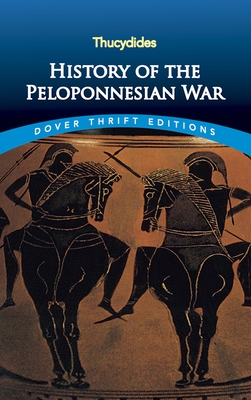 History of the Peloponnesian War (Paperback)


This title is likely unavailable. Email or call for price and availability.
The entire Greek world plunged into three decades of bloodshed in 431 B.C., when the ongoing friction between Athens and Sparta exploded into war. Ten years into the struggle, the Athenian general Thucydides was dismissed for a military failure that led to a triumph for posterity: the former general retired to write an account of the war, resulting in one of the world's great history books.
Thucydides' chronicle of the disastrous 27-year conflict between the Greek city-states resonates with tales of heroism and villainy, deeds of courage and desperation, and the eternal folly of human nature. As an insightful amateur historian, he traces the war's roots to prior hostilities between Greece and Persia and examines the relative merits of the Athenian League and the Spartan alliance. Scrupulously impartial and accurate, Thucydides presents detailed, knowledgeable analyses of battles in addition to dialogues reflecting the political atmosphere. This ancient tale of the rise and fall of a democratic empire remains enduringly relevant to modern times.
In the course of the Peloponnesian War, Athenian general Thucydides was dismissed and banished for his delay in assisting the besieged city of Amphipolis. His military failure and disgrace ended in a triumph for posterity: the retired commander recorded a firsthand account of the events of the war, the first true historical narrative of Western literature.