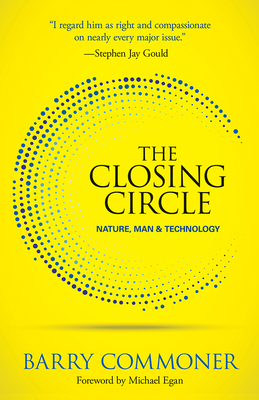 
Available in Warehouse. Wait for Email Confirmation for ETA
This book cannot be returned, cancelled, or exchanged. Please call for availability and pricing
I regard him as right and compassionate on nearly every major issue. -- Stephen Jay Gould A radical argument about the root causes of climate change, The Closing Circle was progressive when it was written in 1971 and its message remains increasingly relevant today. Barry Commoner, the father of modern ecology, claims that production for profit creates dangerous ecological ramifications and offers a concise analysis of the nature, causes, and possible solutions to impending ecological disaster. His analysis is a must-read for those attempting to understand how the global economy impacts our environment and contributes to climate change and for those seeking the steps to be taken in saving our planet. Readers interested in the history of environmental thought will be fascinated to see how many of today's crises were already understood almost fifty years ago. We've made progress in a few places, but it's hard to read Commoner's prescient warnings without a sigh for how little attention we've actually paid to these great challenges. -- Bill McKibben, author of Falter and The End of Nature
Barry Commoner (1917-2012) is considered the father of modern ecology and one of the world's most progressive thinkers and scientist-activists. Credited with creating the four informal rules of ecology, he followed Marxist ideals that led him to posit that climate change is driven by capitalist means of production rather than overpopulation. In 1980 he ran for President of the United States on his own Citizens Party ticket.