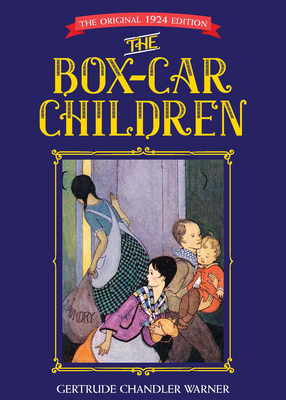 This is book number 1 in the Boxcar Children series.

A #1 Amazon New Release in Children's Train Books Four young orphans discover an abandoned boxcar and move in, embarking on a life of self-reliance and hard work -- but they also enter a world of freedom and adventure. Henry, Jessie, Violet, and Benny are afraid of the grandfather they've never met, and to escape his custody they set out on their own, working odd jobs to make money for necessities. When Violet falls ill, they're forced to take her to a doctor . . . and risk losing their independence.
This new hardcover volume reprints the original 1924 edition, including the illustrations. Ranked among the all-time Top 100 Chapter Books in a School Library Journal survey, The Box-Car Children is also among the National Education Association's Teachers' Top 100 Books for Children.
American author Gertrude Chandler Warner (1890-1979) wrote several stories for children, and her 1924 book, The Box-Car Children, was so successful that she published 18 sequels. The series' popularity has continued to grow: there are currently 150 other books, written by many authors, as well as two animated films. Warner was also a schoolteacher who read the original story to her classes and rewrote it many times to make sure that it would be both engaging and easy to read. She noted that the book "raised a storm of protest from librarians who thought the children were having too good a time without any parental control! That is exactly why children like it!"