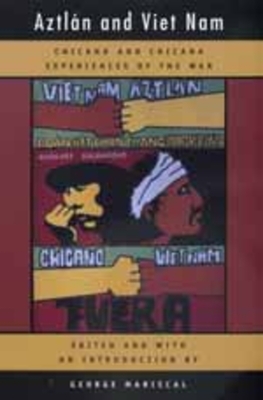 Showcasing over sixty short stories, poems, speeches, and articles, Aztlán and Viet Nam is the first anthology of Mexican American writings about the U.S. war in Southeast Asia. The words are startlingly frank, moving, and immensely powerful, as they call to our attention an important and neglected part of U.S. history. Gathered from many little-known sources, the works reflect both the soldiers' experience and the antiwar movement at home. Taken together, they illustrate the contradictions faced by the traditionally patriotic Mexican American community, and show us the war and the grassroots opposition to it from a new perspective—one that goes beyond the familiar dichotomy of black and white America.

George Mariscal offers critical introductions and provides historical background by identifying specific issues which have not been widely discussed in relation to the war, noting, for example, the potential for Chicano soldiers to recognize their own ethnic and class identities in those of the Vietnamese people. Drawing upon interviews with key participants in the National Chicano Moratorium Committee, Mariscal analyzes the antiwar movement, the Catholic Church, traditional Mexican American groups, and an emerging feminist consciousness among Chicanas.

Also included are personal accounts: Norma Elia Cantú's remembrance of her brother who died in combat, Bárbara Renaud González's evocative poem about Chicanas on the homefront, Alberto Ríos's and Naomi Helena Quiñonez's moving poetry about the Wall, and the recollections of Abelardo Delgado and others on the August 29, 1970 Moratorium.
George Mariscal is Associate Professor of Literature at the University of California, San Diego. He is the author of the award-winning Contradictory Subjects: Quevedo, Cervantes, and Seventeenth-Century Spanish Culture (1991). The grandson of Mexican immigrants, he was drafted into the U.S. Army in 1968 and served the following year in Viet Nam.