Getting It Wrong: Ten of the Greatest Misreported Stories in American Journalism (Paperback) 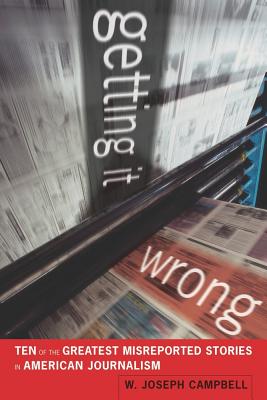 Getting It Wrong: Ten of the Greatest Misreported Stories in American Journalism (Paperback)


This title is likely unavailable. Email or call for price and availability.
Did the Washington Post bring down Richard Nixon by reporting on the Watergate scandal? Did a cryptic remark by Walter Cronkite effectively end the Vietnam War? Did William Randolph Hearst vow to "furnish the war" in the 1898 conflict with Spain? In Getting It Wrong, W. Joseph Campbell addresses and dismantles these and other prominent media-driven myths--stories about or by the news media that are widely believed but which, on close examination, prove apocryphal. In a fascinating exploration of these and other cases--including the supposedly outstanding coverage of New Orleans during Hurricane Katrina--Campbell describes how myths like these can feed stereotypes, deflect blame from policymakers, and overstate the power and influence of the news media.
W. Joseph Campbell is Professor in the School of Communication at American University. He is the author of four other books, including Yellow Journalism: Puncturing the Myths, Defining the Legacies and The Year That Defined American Journalism: 1897 and the Clash of Paradigms.