The Gentrification of the Mind: Witness to a Lost Imagination (Paperback) 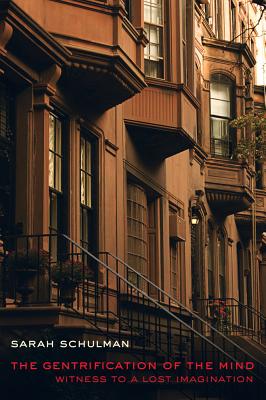 The Gentrification of the Mind: Witness to a Lost Imagination (Paperback)


Available in Warehouse. Wait for Email Confirmation for ETA
In this gripping memoir of the AIDS years (1981–1996), Sarah Schulman recalls how much of the rebellious queer culture, cheap rents, and a vibrant downtown arts movement vanished almost overnight to be replaced by gay conservative spokespeople and mainstream consumerism. Schulman takes us back to her Lower East Side and brings it to life, filling these pages with vivid memories of her avant-garde queer friends and dramatically recreating the early years of the AIDS crisis as experienced by a political insider. Interweaving personal reminiscence with cogent analysis, Schulman details her experience as a witness to the loss of a generation’s imagination and the consequences of that loss.
Sarah Schulman is Distinguished Professor of English at the College of Staten Island, CUNY, USA. She is a novelist, playwright, screenwriter, nonfiction writer, AIDS historian, journalist, and active participant citizen.
“Schulman is brilliant at conveying how devastating and surreal it was to live during the AIDS crisis. . . . [The book is] teeming with ideas, necessary commentary, refreshing connections and examination of the status quo.”
— Lambda Literary

“The essence of what Schulman calls gentrification is to pretend that privilege and difference do not exist and that any attempt to remember that they do is mere ‘political correctness’ rather than facing up to the reality to who does what to whom. To forget these things, is to deceive ourselves—and Schulman’s harsh, bitter prose is a useful way of waking ourselves up.”
— Times Literary Supplement

“A heartbreaking memoir and a get-off-your-ass polemic in one very slim volume.”
— Slate

“A galvanizing account of the transformation, both external and mental, in New York City life.”
— Los Angeles Review of Books

“This bracing, powerful, and well-reasoned work reaffirms the author’s stature as a distinctive American woman of letters. Ideal for an academic setting, it will also precipitate discussion among all those interested in learning more about this painful chapter in U.S. history. Highly recommended.”
— Library Journal

“To her [Schulman’s] mind, the undigested, unacknowledged trauma of AIDS has brought about a kind of cultural gentrification, a return to conservatism and conformity evident in everything from the decline of small presses to the shift of focus in the gay rights movement towards marriage equality. . . . The memory of this lost moment of accountability drives Schulman’s final, stirring call for degentrification, her dream of a time in which people realize not only that it’s healthier to live in complex, dynamic, mixed communities than uniform ones but also that happiness that depends on privilege and oppression cannot by any civilized terms be described as happiness at all.”
— New Statesman

“This is a very good, very sad book about the aftershock of the AIDS crisis in New York. Schulman is a truly gifted thinker . . . Wherever your politics lie, Schulman’s book is a reminder that you need to fight for them everyday if you want to make a difference.”
— FADER

“Schulman uses gentrification, the phenomenon of wealth moving into ‘sketchy’ urban neighborhoods where artists live and making them desirable and unaffordable, as a metaphor for what's happened in literary and arts-world culture over the years. The author, a true woman of letters, makes a persuasive case.”
— Bay Area Reporter

“A brilliant critique of contemporary culture. . . . the most important book of the year.”
— Cult MTL

“A beautifully written screed . . . Schulman shines when she taps her deep knowledge of the AIDS movement—she was a key founder of ACT Up—and the New York art scene to honor those artists who are gone and forgotten. Her rage at the developers who swooped in like vultures to snap up AIDS victims’ apartments is righteous, and her pain at how little a younger generation knows about AIDS is palpable.”
— Now Magazine

“Through a focus on the pulse of the queer community (of the 80s), it touches upon the individual condition (of today).”
— Velvetpark