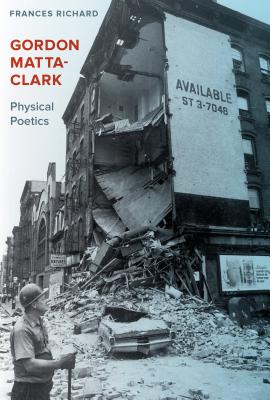 
Available in Warehouse. Wait for Email Confirmation for ETA
Bringing a poet’s perspective to an artist’s archive, this highly original book examines wordplay in the art and thought of American artist Gordon Matta-Clark (1943–1978). A pivotal figure in the postminimalist generation who was also the son of a prominent Surrealist, Matta-Clark was a leader in the downtown artists' community in New York in the 1970s, and is widely seen as a pioneer of what has come to be known as social practice art. He is celebrated for his “anarchitectural” environments and performances, and the films, photographs, drawings, and sculptural fragments with which his site-specific work was documented. In studies of his career, the artist’s provocative and vivid language is referenced constantly. Yet the verbal aspect of his practice has not previously been examined in its own right. Blending close readings of Matta-Clark’s visual and verbal creations with reception history and critical biography, this extensively researched study engages with the linguistic and semiotic forms in Matta-Clark’s art, forms that activate what he called the “poetics of psycho-locus” and “total (semiotic) system.” Examining notes, statements, titles, letters, and interviews in light of what they reveal about his work at large, Frances Richard unearths archival, biographical, and historical information, linking Matta-Clark to Conceptualist peers and Surrealist and Dada forebears. Gordon Matta-Clark: Physical Poetics explores the paradoxical durability of Matta-Clark’s language, and its role in an aggressively physical oeuvre whose major works have been destroyed.
Frances Richard is the author of three books of poetry, coauthor of Odd Lots: Revisiting Gordon Matta-Clark’s “Fake Estates,” and editor of Joan Jonas is on our mind and I Stand in My Place with My Own Day Here: Site-Specific Art at The New School. She teaches at the California College of the Arts.
"Examining the titles of Matta-Clark’s works, as well as private notebooks, aphoristic notecards, letters and loquacious statements he made to various interviewers, Richard—herself a poet—maps with obsessive precision the ways in which the artist’s language use frames and enlarges his artworks, many of which exist now only in the form of documentation. . . . Richard’s nimble exegesis of her subject and his language sets the stage for conjuring a vision of Matta-Clark working in the landscape."
— Chicago Review of Books

"Richard conscientiously treats Matta-Clark's written word as another facet of his artistic production, which serves to contextualize and deepen an understanding of his short-lived career. Presenting these musings, complete with words crossed-out, spelling errors, arrows, and marginal notations from books, provides a conduit to Matta-Clark's archive and displays his playful use of language. This book is remarkable in its ability to systematically weave Matta-Clark's thought process with his artwork in a way that remains directly connected to the archives while still reading narratively. It would be an excellent resource for anyone interested in Matta-Clark and his milieu in the 1970s Soho art scene."
— ARLIS/NA Reviews

"Richard's compelling and crystalline prose make it quite the page-turner. Reading it under lockdown during a pandemic has been a particularly thought-provoking experience. Physical Poetics exemplifies the kind of rigorous work that is difficult to achieve, so thorough is its analysis of the archival and the material evidence. It reads at once like a biography, an essay and an inventory; it is a Matta-Clark concordance, but much more thrilling than that sounds."
— Burlington Magazine

"Richard authors an extensively researched and dense text that examines the archives of the artist, focussing predominantly
on his prosaic texts and irreverent semantic aphorisms recorded on notecards. For any fan or interest in the artist, the book serves as part-analysis of the archive, with a nuanced insight into New York’s emerging contemporary art scene of the late 1960’s and early 70’s. However, the volume also works as semi-biographical, charting Matta-Clark’s tumultuous parentage and maturation, in a parallel to his works, interests, and backdrop of famous connections past, present, and future."
— Visual Studies