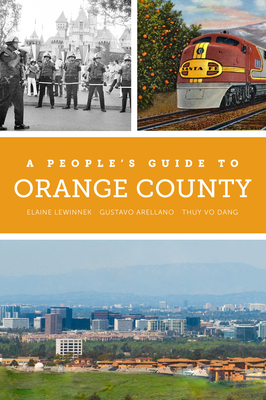 One of the Top Urban Planning Books of 2022, Planetizen

The full and fascinating guidebook that Orange County deserves.

A People’s Guide to Orange County is an alternative tour guide that documents sites of oppression, resistance, struggle, and transformation in Orange County, California. Orange County is more than the well-known images on orange crate labels, the high-profile amusement parks of Disneyland and Knott’s Berry Farm, or the beaches. It is also a unique site of agricultural and suburban history, political conservatism in a liberal state, and more diversity and discordance than its pop-cultural images show. It is a space of important agricultural labor disputes, segregation and resistance to segregation, privatization and the struggle for public space, politicized religions, Cold War global migrations, vibrant youth cultures, and efforts for environmental justice. Memorably, Ronald Reagan called Orange County the place “where all the good Republicans go to die,” but it is also the place where many working-class immigrants have come to live and work in its agricultural, military-industrial, and tourist service economies.

Orange County is the fifth-most populous county in America. If it were a city, it would be the nation’s third-largest city; if it were a state, its population would make it larger than twenty-one other states. It attracts 42 million tourists annually. Yet Orange County tends to be a chapter or two squeezed into guidebooks to Los Angeles or Disneyland. Mainstream guidebooks focus on Orange County’s amusement parks and wealthy coastal communities, with side trips to palatial shopping malls. These guides skip over Orange County’s most heterogeneous half—the inland space, where most of its oranges were grown alongside oil derricks that kept the orange groves heated. Existing guidebooks render invisible the diverse people who have labored there. A People’s Guide to Orange County questions who gets to claim Orange County’s image, exposing the extraordinary stories embedded in the ordinary landscape.

Elaine Lewinnek is professor of American Studies at California State University, Fullerton, and author of The Working Man's Reward: Chicago’s Early Suburbs and the Roots of American Sprawl.

Gustavo Arellano is a columnist for the Los Angeles Times, former editor of OC Weekly, and author of the books Orange County: A Personal History, Taco USA: How Mexican Food Conquered America, and ¡Ask A Mexican!

Thuy Vo Dang is curator for the Southeast Asian Archive at University of California, Irvine, and coauthor of Vietnamese in Orange County.

"Their project applies political acumen to a practical regional guidebook featuring wayback machine–style micro-histories that reveal the county’s depth and breadth. . . . Meticulously, almost giddily cross-referenced, A People’s Guide to Orange County offers sources for every one of its 122 listings: scholars, journalists, poets, and activists. Entries include photographs, maps, archival materials, song lyrics, and protest chants. The idea is to uncover, piece by piece and location by location, the story of—forgive me—the real OC."

"In the public imagination Orange County either has no history at all, or it consists of tract homes, Disneyland, and Republicans. All of those things are true. But, A People's Guide masterfully, and accessibly, demonstrates that Orange County's history runs far deeper—and that it matters."
— Planetizen