Against Demagogues: What Aristophanes Can Teach Us about the Perils of Populism and the Fate of Democracy, New Translations of the Acharnians and the Knights (Hardcover) 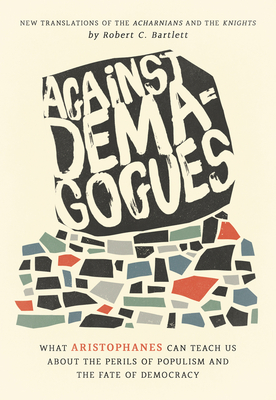 Against Demagogues: What Aristophanes Can Teach Us about the Perils of Populism and the Fate of Democracy, New Translations of the Acharnians and the Knights (Hardcover)

Timeless comedies on resisting tyranny from one of history’s greatest comic playwrights.

Against Demagogues presents Robert C. Bartlett's new translations of Aristophanes' most overtly political works, the Acharnians and the Knights. In these fantastically inventive, raucous, and raunchy comedies, the powerful politician Cleon proves to be democracy's greatest opponent. With unrivalled power, both plays make clear the dangers to which democracies are prone, especially the threats posed by external warfare, internal division, and class polarization.

Combating the seductive allure of demagogues and the damage they cause, Against Demagogues disentangles Aristophanes' serious teachings from his many jokes and pratfalls, substantiating for modern readers his famous claim to "teach justice" while "making a comedy" of the city. The book features an interpretive essay for each play, expertly guiding readers through the most important plot points, explaining the significance of various characters, and shedding light on the meaning of the plays' often madcap episodes. Along with a contextualizing introduction, Bartlett offers extensive notes explaining the many political, literary, and religious references and allusions. Aristophanes' comedic skewering of the demagogue and his ruthless ambition—and of a community so ill-informed about the doings of its own government, so ready to believe in empty promises and idle flattery—cannot but resonate strongly with readers today around the world.

Robert C. Bartlett is Behrakis Professor in Hellenic Political Studies at Boston College and has authored numerous studies on the history of political thought, including recent editions of Aristotle's Nicomachean Ethics (with Susan Collins) and the Art of Rhetoric.

"Against Demagogues [is] enlightening reading for those interested in classical political theory, as well as for the contemporary relevance of these thinkers in helping us consider our current political environment."
— New Books Network