Struggle and Storm: The Life and Death of Francis Adams (Paperback) 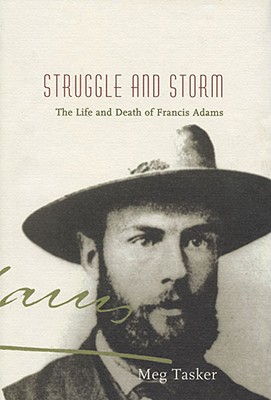 Struggle and Storm: The Life and Death of Francis Adams (Paperback)


This title is likely unavailable. Email or call for price and availability.
Francis William Lauderdale Adams (1862-1893)—poet, novelist, social analyst and journalist—made a significant place for himself in Australian literary and cultural history. Born in England, he was a self-consciously modern writer of the fin de siècle; the theme of suicide figured frequently in his writings, and in death he embodied the romantic myth of the consumptive artist.

Adams arrived in Australia in 1884, full of democratic and literary aspirations, and set out to explore the cultural landscape of his adopted country. A charismatic figure, he was loved by many for his personal beauty and eloquence and for the insouciant charm which smoothed over the sharp edges of his political radicalism and intellectual arrogance.

But his impact on Australian cultural history was larger than the merely personal. He influenced a whole generation of idealistic young socialists in Australia, and had a leading role in the development of the Australian labour movement. Much of his best work was concerned with Australian social and political developments in the years leading up to Federation, and his book The Australians (1893) is a much-quoted classic of Australian social commentary. He was an early and influential spokesman for the Australian nationalism of the 1890s, articulating ideas of democracy and independence from England.

In Struggle and Storm, Meg Tasker explores with texture and nuance both the pleasures of biography and the interesting problem of how to write a literary life a hundred years later. This engaging work is the first full-length biographical study of Francis Adams.
Dr Meg Tasker is a Senior Lecturer in Literature at the University of Ballarat. Her publications include Francis Adams: A Research Guide; an edition of Francis Adams's John Webb's End; and entries on Adams for The 1890s: An Encyclopaedia of British Literature, Art and Culture; The Cambridge Bibliography of English Literature, Vol. 3; and the New Dictionary of National Biography.
“A fascinating book . . . Much of it is autobiography as [Tasker] interweaves notes of her many remarkable discoveries in several countries as well as some of her disappointments. The enthusiasm she brings to her quest is infectious.”  —The Weekend Australian