Lord of All the Dead: A nonfiction novel (Hardcover) 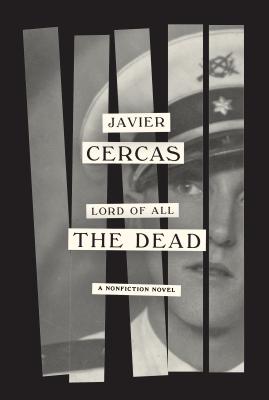 Lord of All the Dead: A nonfiction novel (Hardcover)


This title is likely unavailable. Email or call for price and availability.
A deeply personal work of historical interrogation from the acclaimed author of Outlaws. Javier Cercas, “the bard of [the] movement for the recovery of Spain’s suppressed memory” (The New York Times Book Review), unpacks the legacy of the Spanish Civil War by way of his own family’s history.

Growing up, Cercas was inculcated with the legend of his beloved great-uncle, Manuel Mena, who died at nineteen in the bloodiest battle of the Spanish Civil War—while fighting for Franco. Who was this young man? A fascist hero whose memory is now an embarrassment or a committed idealist who happened to fall on the wrong side of history? In Lord of All the Dead, Cercas pieces together the life of his enigmatic relative and in so doing tells the story of an entire generation. Combining intimate family history, investigative scholarship, personal confession, and a novelist’s imagination, Cercas has crafted a transcendent portrait of a country’s indelible scars, a book about heroism, death, the persistence of the past, and the meaning of an individual life against the tapestry of history.
Javier Cercas was born in Spain in 1962. He is a novelist and columnist, and he has received numerous international awards. His books include Soldiers of Salamis (which has sold more than a million copies worldwide), The Anatomy of a Moment, The Tenant and The Motive, The Speed of Light, and The Impostor. His books have been translated into more than thirty languages. He lives in Barcelona.
“Cercas keeps his readers curious to the end, and Lord of All the Dead is arguably even more important than its predecessor [Soldiers of Salamis] as a contribution to healing the wounds that remain open in Spain to this day.” —John Hooper, New York Times Book Review

“Powerful . . . Painted with vivid and arresting specificity . . . Lord of All the Dead will neither flatter liberal pieties nor assuage feelings of collective guilt. It may help Spaniards, and people farther afield, to better understand the lure of Fascism, a pressing task in today’s world. Franco is still dead, but the need to monitor his condition has never been more urgent.” —Giles Harvey, The New Yorker

“A book of reportage through which the dead walk with all the vibrancy of the living . . . Fact-based but also imaginative . . . A meditation about personal history and family history, as well as an interrogation about whether it is ever possible to truly escape the past.”—Elliot Ackerman, The Wall Street Journal

“In corona-isolation, I picked up Lord of All the Dead, thinking I would read a page or two. I couldn’t put the book down . . . It is unlike anything else: strangely original . . . And marvelously written . . . And may I say that, in reading about riven Spain, I thought about riven America? I mean, America at present? . . . When he was at last able to tell Manuel Mena’s story—and by extension, his own—Cercas felt a sense of euphoria. So did I, on merely reading the book . . . A major achievement, in historical, literary, and moral terms.”—Jay Nordlinger, National Review

“Remarkable . . . I fell into this dream-like experience of reading this gorgeous book over two days. I could not put it down . . . I just loved this book. It’s beautifully written. It’s reportage as well as a deep emotional connection to the time and to the people of this small town.” —Bill Goldstein, NBC Weekend Today in New York

“Magnificent . . . Cercas is a marvelous writer, and his character studies of the elusive Mena are masterly. Ultimately, grappling with the enormously nuanced, continuing story of sacrifice, passion, and dishonor allowed for significant forgiveness and release. A beautiful, moving story that must have been extremely difficult for the author to write. Thankfully for readers, he persisted.” —Kirkus Reviews (starred)

“A fascinating, complicated portrait of a young soldier driven to action by the crises of his time.” —Booklist

“Cercas reconstructs a life with a novelist’s finesse.” —Library Journal

“Cercas plays fast and loose with time, history, and memory in all of his spectacular autobiographical novels.” —Elaine Margolin, World Literature Today


Selections from the international reviews:

“Javier Cercas’s last book, The Impostor, is, in its compassion and generosity, one of the most accomplished books I’ve ever read. His new novel is even better . . . Moving . . . Beautifully achieved . . . There is no one writing in English like this: engaged humanity achieving a hard-won wisdom. It is powerful stuff.” —The Sunday Times

“Poignant and memorable . . . A lucid and immensely human study not only of the pity and futility of war but also of the enduring wounds it leaves in a society . . . Lord of All the Dead is a virtuoso performance from a writer who is able to be both a historian and novelist simultaneously . . . A powerful and strikingly original portrait of a country whose history is a nightmare from which it cannot wake.” —Times Literary Supplement

“A brave political and family history . . . One of the strengths of Lord of All the Dead is the breadth of its subject matter . . . In this elegant and penetrating narrative Cercas shows us how important it is that Mena’s life is not forgotten . . . Superb.” —The Herald (Scotland)

“A subversive and disenchanted view of war in general and the Spanish conflict in particular, in a fine translation by Anne McLean . . . It can be moving, unexpectedly funny, racy, demotic, or deadpan.” —Spectator

“Cercas’s candid wranglings with how to tell this tale, his own deep discomfort and the grave maturity with which he acknowledges he can’t feel morally superior to Mena make him a wonderfully warm and wise guide.” —The Times

“Only Cercas could have written a novel like this, at the peak of his maturity as a writer; he is one of the best we have.” —ABC

“An excellent novel . . . fascinating both in its exploration of the past and in the playful creativity of its own narrative.” —El Cultural

“A book that moves, intrigues, and lucidly questions—along with offering answers—the collective importance of our most fateful, dramatic decisions as individuals." —La Razón

“A magisterial book on the hazardous trajectory of one man.” —La Croix

“The new apex of an already fascinating body of work.” —Lire

“A book even more radical, daring, and important than anything this greatest contemporary Spanish writer has ever attempted before.” —Les Inrockuptibles