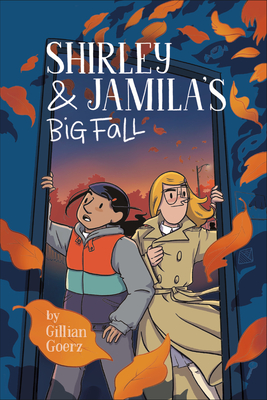 
On Our Shelves as of 9am Today
For fans of Raina Telgemeier and Victoria Jamieson, this middle grade graphic novel series tells the story of Shirley and Jamila, two girl detectives on a mission to stop their school’s biggest bully once and for all

As Jamila settles into the rhythms of classes and after-school basketball practice, Shirley has a new mystery on her mind. Her old enemy Chuck is up to his usual tricks: He's been blackmailing kids all over school, and Shirley knows that she and Jamila can put a stop to it.

They hatch a plan: They'll break into his house late one night and recover all the notes Chuck's been using to blackmail innocent kids.

But while Shirley and Jamila are at the house, another intruder arrives—an intruder who can help them put a stop to Chuck's crimes once and for all.

Gillian Goerz is a Canadian illustrator, writer, cartoonist, and creator of the Shirley and Jamila series. Her illustrations can be found in books such as Ryan North's choosable path adventures To Be or Not to Be and Romeo and/or Juliet. Her comics have been seen in The Walrus, Descant Magazine, and the Humber Literary Review with frequent collaborator and award-winning author Mariko Tamaki. CBC Books named Gillian's autobiographical comic "a highlight" of the anthology The Secret Loves of Geek Girls. She lives in Toronto, Canada.
A 2023 ALA Rise: A Feminist Book Project Pick

"Goerz’s detailed and expressive art pairs with dynamic dialogue to create a strong cast of characters and plotting. Emotional tension from new and developing friendships and suspense stemming from the case keep the pacing taut. Readers will especially empathize with Jamila as she worries and works to balance friendships with very different people. A solid next installment to this detective series centered on friendship." —Kirkus