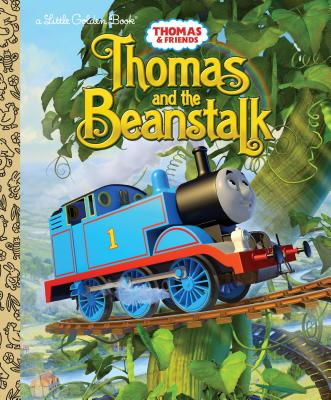 
Available in Warehouse. Wait for Email Confirmation for ETA
A favorite fairy tale retold in a Little Golden Book--starring Thomas the Tank Engine and his friends!

Thomas the Tank Engine stars in a retelling of the fairy tale "Jack and the Beanstalk." Thomas tells his friends the story of Jack, the magic beans, and the giant beanstalk before bedtime. The next day, while carrying a load of beans, Thomas dreams that he rides up a giant beanstalk to a land of giants high above the clouds. Thomas & Friends(TM) fans ages 3 to 7 will be riveted by this beautifully illustrated hardcover story--a familiar fairy tale retold in a thrilling new way, featuring their favorite little blue engine, his good friends Percy and James, a tiny golden steam engine, and a pinch of magic.
Established in July 2013 in a merger between Penguin and Random House, Penguin Random House, with nearly 250 independent imprints and brands on five continents, more than 15,000 new titles published each year, and close to 800 million print, audio, and eBooks sold annually, is the world’s leading trade book publisher. Like its predecessor companies, Penguin Random House is committed to publishing adult and children’s fiction and nonfiction print editions and is a pioneer in digital publishing. Its publishing lists include more than 60 Nobel Prize laureates and hundreds of the world’s most widely read authors.