Encyclopedia Brown and the Case of the Sleeping Dog (Paperback) 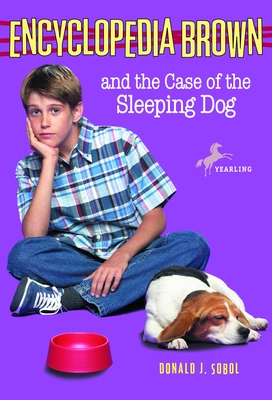 Encyclopedia Brown and the Case of the Sleeping Dog (Paperback)

This is book number 22 in the Encyclopedia Brown series.

Will Wilford Wiggins finally part the kids of Idaville from their hard-earned allowances? Can Encyclopedia stop Sally from belting Bugs Meany into the next millennium? What happens when performance art comes to Idaville? To find the answers—and to solve the mysteries of the sleepy beagle and the shower singers—read the continuing adventures of the world's most famous boy detective!

Donald J. Sobol was the author of the highly acclaimed Encyclopedia Brown series and many other books. His awards include a special Edgar Award from the Mystery Writers of America for his contribution to mystery writing in the United States, and the Pacific Northwest Library Association Young Readers’ Choice Award for Encyclopedia Brown Keeps the Peace.

Warren Chang is an award-winning artist and illustrator. He graduated the ArtCenter College of Design in Pasadena, California, in 1981 with a BFA in illustration. Among his illustration credits are the Encyclopedia Brown books and Ola Shakes It Up by Joanne Hyppolite. Chang is also a highly acclaimed oil painter and was inducted as a Master Signature member of the prestigious Oil Painters of America, the largest organization of oil painters in the United States. He lives in California and teaches at San Francisco’s Academy of Art University.