The Library Machine (The Extraordinary Journeys of Clockwork Charlie) (Hardcover) 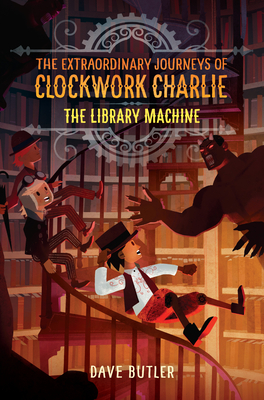 The Library Machine (The Extraordinary Journeys of Clockwork Charlie) (Hardcover)

This is book number 3 in the Extraordinary Journeys of Clockwork Charlie series.

The third and last book in the Extraordinary Journeys of Clockwork Charlie trilogy wraps up Charlie's adventures with a rousing ending!

Charlie's life used to be quiet, but now it's full of adventure and surprises--none more surprising than the discovery that he is not a regular boy but one of his father's inventions--a living clockwork boy!

Charlie's weeks have been filled with dwarves, kobolds, pixies, and humans, as he's sought to avenge his father's death and stop the dastardly Iron Cog from their plans to sow chaos throughout the world. Now his journey takes him to Marburg, Germany, where he and his friends must uncover the secrets of a hidden kobold library in order to save civilization--and their own skins.

This dramatic conclusion to the trilogy will have readers cheering on its unlikely hero to the very last page!
Dave lives in an old house and works in a study where one of the biggest bestsellers of the 20th century was written--Dave has kept the room's original shag carpet and wood-veneered walls. He likes games, guitars, languages, and, most of all, his family. He is also the author of The Kidnap Plot and The Giant's Seat. Follow him at @DavidJohnButler.