Germany to Georgia: Ten Generations of an American Family (Paperback) 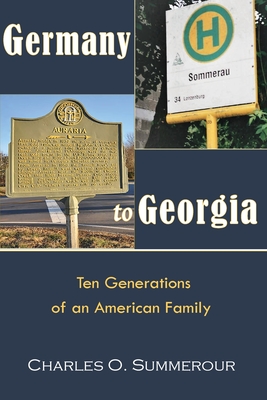 Germany to Georgia: Ten Generations of an American Family (Paperback)

Ten Generations of an American Family

Germany to Georgia is told from the perspective of its 8th generation author. The book travels with the Summerour family from their origin in Germany, their arrival in the British colony of Pennsylvania in 1748, then the pioneer settlement of North Carolina, to their eventually locating in Georgia.

Told in a series of interesting stories and family genealogy, the journey includes a venture into the Gold Rushes in Georgia and California, which resulted in an accumulation of wealth that would make them large landowners in what is now suburban Atlanta, Georgia.

History reveals that the Summerour family have had a sustaining love for family, along with a spirit of cooperation with friends, neighbors, and government entities.

Their story tells of the eventual transition from an agrarian-based lifestyle to a broad-based living for the latter generations, including the children and grandchildren of the writer.