A Time To Look Back: Growing up during the Cuban revolution (Hardcover) 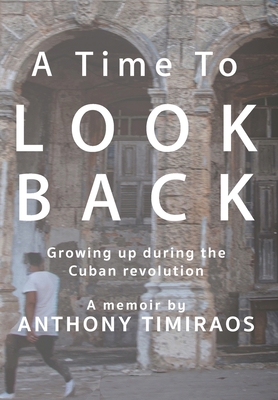 A Time To Look Back: Growing up during the Cuban revolution (Hardcover)

The current international media coverage of immigrants risking their lives to emigrate to a free country makes my personal story meaningful, educational, and relevant. A cruise to Cuba during the Christmas holidays of 2018 brought me back to my childhood when my family was being forced to adapt to a communist revolution. Then came the disappointment of a failed citizens revolt that attempted to return the country to a democracy, the subsequent raid by armed soldiers of my family's home and the eventual arrest of my father without cause. These were only a few of the events that forced my family to plan our exodus to the United States.

At the age of 8, I was sent to the U.S. alone with my brother under a program coordinated by the Catholic Charites and the U.S. State Department. Operation Pedro Pan is the largest mass exodus of children in the Western Hemisphere. We were welcomed to a new homeland by a network of generous religious organizations, corporations, private citizens, and a country that had empathy for families seeking asylum from restricted and dangerous societies. I had to live in numerous locations including a regretful stay in an orphanage for troubled young boys from broken families who could not be placed in foster homes. While I was still separated from my family, I experienced the horrors of a close encounter with nuclear war.

My book combines my experience in Cuba during the cruise, my recollections as a child, and how political events and decisions made by the Cuban, U.S. and Soviet Union governments during that time changed the course of history and affected my family directly. I wrote this book because history is important and should have a significant place in our education system. Without it, we have no platform from which to leap ahead. I wrote this book because new generations should have access to roads others have paved in the past that perhaps have made life just a bit better for everyone. I wrote this book in hopes that readers take what they can, continue to build their own path and distance themselves from mistakes of the past.