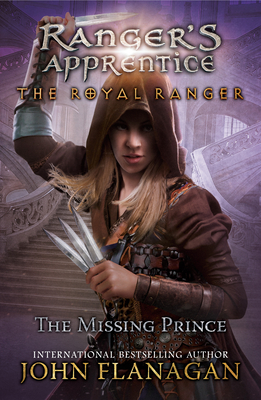 By John Flanagan
List Price: $9.99
Our Price: $8.99
(Save: $1.00 10%)
On Our Shelves as of 9am Today
International bestselling author John Flanagan returns to world of Ranger's Apprentice in the fourth installment of the Royal Ranger series starring Maddie, Will Treaty's fearless young apprentice.

Will Treaty and his apprentice, Maddie have been urgently summoned to Castle Araluen. When they arrive they learn a shocking truth: the Prince of Gallica is missing--and the King of Gallica has asked for help. All reports suggest that the young prince has been taken prisoner by the dangerous and powerful Baron Joubert de Lassigny. King Duncan knows that sending troops to Gallica to rescue the prince could start a war, as could openly helping Gallica resolve internal convict. But there's another way to save the prince: the Ranger Corps.

Soon, Will and Maddie are on the road to rescue the missing prince, disguised as father and daughter jongleurs. Maddie will have to use her knifethrowing skills to keep up her disguise, and her ranger's apprentice training to complete the mission. But going undercover is dangerous--and the road presents its own hazards. Can she and Will use all their talents to save the prince, or will the arrogant Baron uncover their plans and put their lives, and their kingdom, at risk?

Internationally bestselling author of the Ranger's Apprentice and Brotherband series, John Flanagan returns in the captivating next installment of the Royal Ranger series: The Royal Ranger: The Missing Prince. Perfect for fans of J.R.R. Tolkien, Brian Jacques's Redwall, and George R.R. Martin's Game of Thrones!

Praise for The Missing Prince:

"Flanagan builds suspense with well-practiced skill . . . . Tension increases right up to the last page." --Booklist
JOHN FLANAGAN grew up in Sydney, Australia, hoping to be an author, and after a successful career in advertising and television, he began writing a series of short stories for his son, Michael, in order to encourage him to read. Those stories would eventually become The Ruins of Gorlan, Book 1 of the Ranger's Apprentice epic. Now with his companion series, Brotherband, the novels of John Flanagan have sold millions of copies and made readers out of kids the world over. Mr. Flanagan lives in the suburb of Mosman, Australia, with his wife. In addition to their son, they have two grown daughters and four grandsons. You can visit John Flanagan at www.WorldofJohnFlanagan.com
"Flanagan builds suspense with well-practiced skill and a flair for the dramatic. Tension increases right up to the last page. . . . The writing offers adventure, wit, and sufficient background information for those new to the Ranger’s Apprentice series to follow the story, but it will be enjoyed most by those who have read one or more of the three previous books in the Royal Ranger subseries, featuring the first girl apprenticed to a ranger." --Booklist