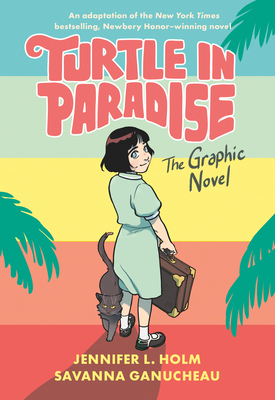 
Available in Warehouse. Wait for Email Confirmation for ETA
A graphic novel adaptation of the beloved, bestselling Newbery Honor-winning novel.

Eleven-year-old Turtle is smart and tough and has seen enough of the world not to expect a Hollywood ending. After all, it's 1935 and money—and sometimes even dreams—is scarce. So when Turtle's mother gets a job housekeeping for a lady who doesn't like kids, Turtle heads off to Florida to live with relatives. Florida's like nothing Turtle's ever seen before, though. It's full of ragtag boy cousins, family secrets to unravel . . . and even a little bit of fun. Before she knows what's happened, Turtle finds herself coming out of her shell. And as she does, her world opens up in the most unexpected ways.

Inspired by family stories, three-time Newbery Honor winner Jennifer L. Holm blends family lore with America's past in this charming gem of a novel, now adapted into graphic novel form by rising star Savanna Ganucheau.
Jennifer L. Holm's great-grandmother emigrated from the Bahamas to Key West in 1897. Jennifer is the author of two Newbery Honor books, Our Only May Amelia and Penny from Heaven. She is also the author of several other highly praised books, including Middle School Is Worse Than Meatloaf and the Babymouse graphic novel series, which she collaborates on with her brother, Matthew Holm. Jennifer lives in California with her husband and two children. You can visit her Web site at www.jenniferholm.com.
Starred Review, Kirkus Reviews, April 15, 2010:
“Sweet, funny and superb”

Starred Review, Publishers Weekly:
"This humorous adventure effectively portrays Turtle as caught between her mother's Hollywood-inspired dreams and the very real family . . . that offer a different kind of paradise."