Regina Is NOT a Little Dinosaur (Hardcover) 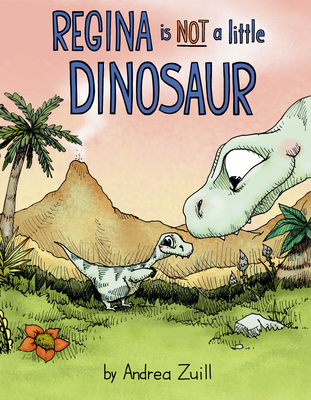 Regina Is NOT a Little Dinosaur (Hardcover)

“Andrea Zuill captured my heart with her wonderful book Wolf Camp, she kept it safe and sound with Sweety, and she continues to make me feel warm and fuzzy with her newest, Regina Is NOT a Little Dinosaur. I don’t know what it is — the words? The personalities of the characters coming through in conversation bubbles? The expressive art? It must be all three, because each of Zuill’s books brings me such joy!”
— Liesl Freudenstein, Boulder Book Store, Boulder, CO

Meet a young dinosaur seeking her independence in this hilarious picture book from the author of WOLF CAMP and SWEETY.

When Regina's mother heads off to hunt, she tells her little dinosaur: stay in the nest and be mama's good little carnivore. But just who is she calling little?! Regina is big! And she has all the tools to hunt herself: a fear-inducing predator stare, a terrifying roar, and an uncanny ability to camouflage. And so Regina sets off on her first real hunt, all alone. ROAR! Along the way, she meets some truly huge dinosaurs, and hilariously, and miserably, fails at catching anything. What if she has to live her life as an.... herbivore?! Little kids everywhere will recognize themselves in Andrea Zuill's intrepid young dino--eager for independence, but still very much needing the safety and comfort of home.
Andrea Zuill is the author-illustrator of Regina is NOT a Little Dinosaur, an Indie Next List selection; Sweety, a Booklist Best Book of the Year; and Wolf Camp, a Children’s Choice Award finalist. She is also the creator of Business Pig, Dance Is for Everyone, and Marigold & Daisy. Andrea is the illustrator of Cat Dog Dog by Nelly Buchet, an American Library Association Notable Book which was called "A clever, winning read-aloud for modern families" in a starred review from Kirkus. Her work has been exhibited in galleries in California, Texas, and New York. Visit Andrea on the Web at andreazuill.org or follow her on Twitter at @AndreaZuill.

Praise for Regina is NOT a Little Dinosaur:

“Regina’s expressions are priceless… her emotive eyes flashing with glee, rage, or panic in turn. Young readers (and their adults) will laugh out loud at the relatable protagonist and her adorable antics.” --Booklist

“Indelible Regina roars, slinks, sniffs, and pounces…. A gem of comic timing and expression: readers will want to incorporate the conciliatory nose bump that mother and daughter dino share (“Boop!”) into their own repertoire of affectionate moves.” --Publishers Weekly

Praise for Sweety:
"With hilarious pictures and tender, observant writing, Andrea Zuill gets to the heart of what it is to be an oddball in 'Sweety,' an endearing picture book for children..." --The Wall Street Journal

"Zuill takes a common theme--finding the courage to be yourself--and makes it funny, heartwarming, and inspiring." --Booklist, starred review