True Believer: The Rise and Fall of Stan Lee (Hardcover) 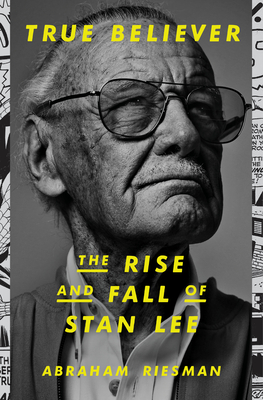 “A biography that reads like a thriller or a whodunit . . . scrupulously honest, deeply damning, and sometimes even heartbreaking.”—Neil Gaiman

Stan Lee was one of the most famous and beloved entertainers to emerge from the twentieth century. He served as head editor of Marvel Comics for three decades and, in that time, became known as the creator of more pieces of internationally recognizable intellectual property than nearly anyone: Spider-Man, the Avengers, the X-Men, Black Panther, the Incredible Hulk . . . the list goes on. His carnival-barker marketing prowess helped save the comic-book industry and superhero fiction. His cameos in Marvel movies have charmed billions. When he died in 2018, grief poured in from around the world, further cementing his legacy.

But what if Stan Lee wasn’t who he said he was? To craft the definitive biography of Lee, Abraham Riesman conducted more than 150 interviews and investigated thousands of pages of private documents, turning up never-before-published revelations about Lee’s life and work. True Believer tackles tough questions: Did Lee actually create the characters he gained fame for creating? Was he complicit in millions of dollars’ worth of fraud in his post-Marvel life? Which members of the cavalcade of grifters who surrounded him were most responsible for the misery of his final days?

And, above all, what drove this man to achieve so much yet always boast of more?

Abraham Riesman is a Providence-based journalist, writing primarily for New York magazine about arts and culture. His work has also appeared in The Wall Street Journal, The Boston Globe, The New Republic, and Vice, among other publications.

“Tantalizing . . . Riesman puts in the hard yards to separate fact from myth.”—Dorian Lynskey, The Spectator

“Striking . . . True Believer paints a portrait of a man who was just as flawed as his heroes, and he emerges all the more human for it. . . . [Riesman is] a must-read chronicler of the comic book industry.”—The Hollywood Reporter

“For those who know Stan Lee from his sunny, funny cameos in Marvel films, get ready for an unputdownable deep dive. The man lived a life—warts and all—and Riesman captures the shadow and sunshine in equal measure.”—Patton Oswalt

“True Believer is in every imaginable way the biography that Stan Lee deserves—ambitious, audacious, daring, and unflinchingly clear-eyed about the man’s significance, his shortcomings, his transgressions, his accomplishments, and his astonishing legacy.”—Robert Kolker, author of Hidden Valley Road

“Stan Lee was a mythmaker, both creatively and autobiographically. To reach the truth of his troubled and troubling life story, Riesman has had to peel away layers of quarrel, exaggeration, credit-grabbing, dispute, and faulty memory. The result is an enthralling, vibrantly written portrait of one of American popular culture's great innovators."—Mark Harris, author of Pictures at a Revolution and Five Came Back

“The story of Stan Lee is a wild ride, sometimes breathtaking, often shocking—but it is also a wholly American one, rooted in the transformation of hardscrabble reality into glorious dreams, of legends into truth, of absence into action, of immigration into assimilation.”—Sarah Weinman, author of The Real Lolita

“Stan Lee was, all at once, a genius, a schlepper, a hack, a huckster, a marvel. Riesman painstakingly dug into how much credit each of those overlapping personae deserves, and then he spun all those threads into a book that reads with the supple speed of Mr. Fantastic himself.”—Chris Bonanos, author of Flash: The Making of Weegee the Famous

“A life rich with unexpected turns and a biography filled with personality. In looking at a man who created heroic stories for a living, Riesman bravely examines the trace lines underneath the legends of his life. The result is a startling, fresh portrait of a truly American career.”—Nathan Heller, author of The Private Order

“Jam-packed with carefully compiled evidence of just how much delectable bullshit, staggering failure, and vicious backbiting goes into the making of a great American genius. I genuinely could not put it down."—Penny Lane, director of Hail Satan?

“Take it from someone who has always found comic books alluring but knew next to nothing about the medium’s history before reading True Believer: this book will pull you in no matter what level of knowledge or built-in curiosity you bring to it.”—Leon Neyfakh, co-creator of Slow Burn and Fiasco