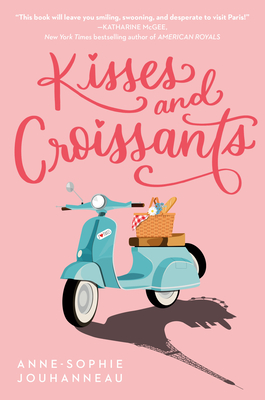 By Anne-Sophie Jouhanneau
List Price: $11.99
Our Price: $9.99
(Save: $2.00 17%)
On Our Shelves as of 9am Today
As sweet as a macaron from Laduree, this romantic novel set in Paris about an American ballerina and a charming French boy is parfait for fans of American Royals and Netflix's Emily in Paris.

Mia Jenrow has always known she's destined to be a professional ballerina. In fact, it’s in her blood—according to family legend, her too-many-greats-to-count-grandmother once danced for the Paris Opera and was painted by Degas himself! Her parents say it’s just a fantasy, but to Mia it’s so much more than that. It’s her fate.

Mia is planning to spend a magical summer in France pursuing her dream, but as she pirou-ettes into Paris, she soon realizes it may be a bit more complicated than she hoped. For starters, there’s her rival, Audrey, who will stop at nothing to show her up. There’s her ballet instructor, whose impossibly high standards push her to the breaking point. And then . . . there’s Louis. Devastatingly, distractingly charming Louis. He’s eager to show Mia his city—and Mia is more than happy to hop on his Vespa and wrap her arms around him as they pass the gleaming lights of the Eiffel Tower.

Mia’s summer was supposed to be about ballet—but there’s a reason Paris is called the City of Love. . . .
French author Anne-Sophie Jouhanneau's books have been translated into seven languages. This is her English-language debut. She lives in New York City with her Australian husband. Visit her online at www.asjouhanneau.com.
Praise for KISSES AND CROISSANTS:

A Bustle "Best New Books to Read This April" selection

“A charming story about family, first love, and chasing your dreams. Grab a croissant, because this book will leave you smiling, swooning, and desperate to visit Paris!”— Katharine McGee, New York Times bestselling author of American Royals

“Watched Emily in Paris and want more romance, pastries, and Paris? Kisses and Croissants is the one for you. It was an incredibly satisfying and delightful read and you’ll find yourself completely absorbed in Mia’s journey.”—The Nerd Daily

"If you're looking for a Parisian escape this spring, then look no further than the enchanting confection that is Kisses and Croissants by Anne-Sophie Jouhanneau."—Popsugar

"If you love romances like To all the Boys I've Loved Before or Anna and the French Kiss, you'll LOVE Kisses and Croissants."—Brit + Co

"Paris simply shines; readers’ senses will come alive with all the city has to offer."— SLJ