The Last Duel (Movie Tie-In): A True Story of Crime, Scandal, and Trial by Combat (Paperback) 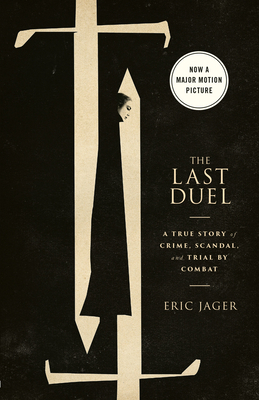 The Last Duel (Movie Tie-In): A True Story of Crime, Scandal, and Trial by Combat (Paperback)


Available in Warehouse. Wait for Email Confirmation for ETA
NEW YORK TIMES BESTSELLER • NOW A MAJOR MOTION PICTURE • “A taut page-turner with all the hallmarks of a good historical thriller.”—Orlando Sentinel

In the midst of the devastating Hundred Years’ War between France and England, Jean de Carrouges, a Norman knight fresh from combat in Scotland, returns home to yet another deadly threat. His wife, Marguerite, has accused squire Jacques Le Gris of rape. A deadlocked court decrees a trial by combat between the two men that will also leave Marguerite’s fate in the balance. For if her husband loses the duel, she will be put to death as a false accuser.

While enemy troops pillage the land, and rebellion and plague threaten the lives of all, Carrouges and Le Gris meet in full armor on a walled field in Paris. What follows is the final duel ever authorized by the Parlement of Paris, a fierce fight with lance, sword, and dagger before a massive crowd that includes the teenage King Charles VI, during which both combatants are wounded—but only one fatally.

Based on extensive research in Normandy and Paris, The Last Duel brings to life a colorful, turbulent age and three unforgettable characters caught in a fatal triangle of crime, scandal, and revenge. The Last Duel is at once a moving human drama, a captivating true crime story, and an engrossing work of historical intrigue with themes that echo powerfully centuries later.
Eric Jager holds a Ph.D. from the University of Michigan and has also taught at Columbia University. An award-winning professor of English at UCLA, he is the author of two previous books, including The Book of the Heart (a study of heart imagery in medieval literature) and numerous articles for acclaimed academic journals. He lives in Los Angeles.
“Succeeds brilliantly in combining page-turning intensity with eye-opening insights into the bizarre ritual of judicial combat in the Middle Ages.”—The Times (London)

“An enthralling story that reads like fiction but is based on reliable sources. A world of passion, cruelty, and mismanaged law.” —Norman Cantor, author of Inventing the Middle Ages and In the Wake of the Plague

“If you read only one book about the Middle Ages, Eric Jager’s thriller is the one to read.” —Steven Ozment, author of A Mighty Fortress and The Burgermeister’s Daughter

“Eric Jager uses the historical record to marvelous effect when recounting the riveting story of two men locked in mortal combat. . . . Two worlds duel in this fascinating portrait of an end of an age-the feudal aristocracy and the chivalric court—and who we deem the true victor is brilliantly left open to interpretation in Jager’s engrossing tale.” —Margaret F. Rosenthal, author of The Honest Courtesan

“A spectacular panorama of the late Middle Ages. . . a historical thriller that leaves us with the impression of having known and lived in another world. It combines the vivid erudition of Barbara Tuchman’s Distant Mirror with the suspense and drama of Umberto Eco’s Name of the Rose. Eric Jager has invented a genre that reminds us that human nature has not changed very much over the ages and that sometimes reality is bigger than life and more riveting than fiction.” —R. Howard Bloch, Augustus R. Street Professor of French, Yale University