Agent Most Wanted: The Never-Before-Told Story of the Most Dangerous Spy of World War II (Hardcover) 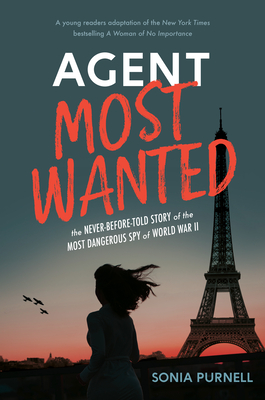 Agent Most Wanted: The Never-Before-Told Story of the Most Dangerous Spy of World War II (Hardcover)

“Moxie. That’s what Virginia Hall was made of. I am thankful to Sonia Purnell for this story as I love reading about incredibly brave women and their contributions to our world. In this case, she helped save it from the tyranny of Nazi Germany.”
— Debbie White, The Well-Read Moose, Coeur d'Alene, ID

Virginia Hall was deemed "the most dangerous of all allied spies" by the Gestapo. Armed with her wits and her prosthetic leg, she was deployed behind enemy lines to inspire resistance in France, providing crucial support to fighting the Nazi occupation. In this largely untold story, Sonia Purnell uncovers the truth behind a Baltimore socialite who was essential to allied victory.

Adapted for the elementary to middle school audience, Agent Most Wanted is equal parts an inspiring tale of feminism in a time when women weren't taken seriously, an epic spy story, and, of course, a retelling of winning one of the largest global conflicts in modern history.
Sonia Purnell is a biographer and journalist who has worked at The Economist, The Telegraph, and The Sunday Times. Her book Clementine: The Life of Mrs. Winston Churchill (published as First Lady in the UK) was chosen as a book of the year by The Telegraph and The Independent, and was a finalist for the Plutarch Award. Her first book, Just Boris, was longlisted for the Orwell prize.
★“[A] gripping nonfiction work that reads like a spy thriller...The account of her many exploits is wonderfully written and made even more phenomenal by her determination. Readers will walk away inspired. A first purchase where WWII history and riveting tales of adventure are popular.” – School Library Journal (starred review)

★"This riveting biography provides the framework of Hall's life, concentrating on the war years and her phenomenal ability to fade into the background while gathering intelligence, communicating with the British, and undermining German control within occupied France. Young readers intrigued by espionage during World War II will find this a well-researched, smoothly written, and completely riveting account of Hall's experiences."--Booklist (starred review)

★"Well-chosen, key moments convey Hall’s reliance on both luck and her own instincts, her quick thinking, her immense skill at assessing perilous situations, and her frank courage. . . A captivating account of a remarkable woman."--Kirkus (starred review)