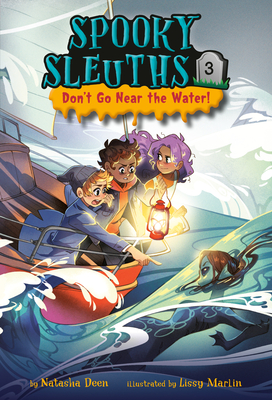 This is book number 3 in the Spooky Sleuths series.

A strange woman seems to have eerie control over people. Is it science . . . or strange and ghostly? Find out in this new spooky chapter book series, Spooky Sleuths.

Asim's field trip is freaking him out! His class is on a boat, exploring the Salish Sea, when he sees a pale, scowling woman staring at him from under the water. Asim's friend Rokshar thinks it's just a seal. She always finds a scientific explanation for the strange things that happen in town.

But when Asim's dad hears otherworldly music coming from the water, he feels so drawn to it that he tries to throw himself in! Could a fairmaid—a mermaid from Guyanese folklore—be to blame?

Find out . . . if you dare! Don't miss this new series based on ghost stories from Guyana.
Natasha Deen has written more than a dozen books for young readers. After spending her early childhood in Guyana, she moved to Calgary in Alberta, Canada, which she found terribly exciting until she met her first minus-forty-degree winter day, at which point she began to question the sanity of the grown-ups around her. She lives in Edmonton, and keeps warm with tea and cupcakes. Find out more at natashadeen.com and follow her on Twitter @natasha_deen.

Lissy Marlin is an award-winning, New York Times bestselling illustrator from the Dominican Republic with a simple mission: to bring a little bit of magic to everyday life, one piece of art at a time! Presently, she spends her days as a freelance illustrator, and her work includes character design, graphic novels, picture books, and fun middle-grade novels such as Neil Patrick Harris's the Magic Misfits series. She lives in Philadelphia. Find out more at lissymarlin.com.