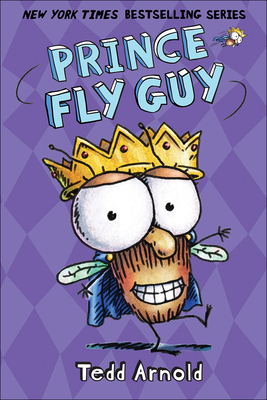 This is book number 15 in the Fly Guy series.

Once upon a time, Buzz writes a fairy tale for a class assignment and Fly Guy becomes a handsome prince
In the latest installment of Tedd Arnold's NEW YORK TIMES bestselling Fly Guy series, Buzz has a homework assignment to write a fairy tale and he asks Fly Guy to help. Fly Guy doesn't like to think of himself as some of Buzz's suggestions--an ugly troll, a smelly pig herder--so he becomes a handsome prince instead Prince Fly Guy flies to a dark castle, fends off a giant, and rescues a beautiful princess.
Even reluctant readers will enjoy this fun, zany story about Fly Guy's adventure in a fairy tale.

Tedd Arnold is the bestselling author and illustrator of the Fly Guy, Green Wilma, Parts, and Huggly series and the illustrator of DETECTIVE BLUE. He has received Theodor Seuss Geisel Honors for HI! FLY GUY and I SPY FLY GUY! Tedd lives with his wife, Carol, in Florida.