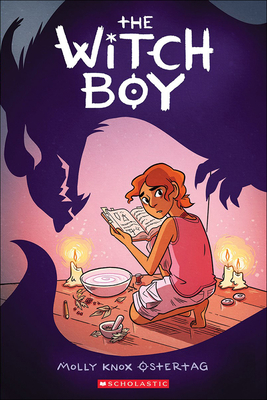 
Available in Warehouse. Wait for Email Confirmation for ETA
This book cannot be returned, cancelled, or exchanged. Please call for availability and pricing
In thirteen-year-old Aster's family, all the girls are raised to be witches, while boys grow up to be shapeshifters. Anyone who dares cross those lines is exiled. Unfortunately for Aster, he still hasn't shifted . . . and he's still fascinated by witchery, no matter how forbidden it might be.
When a mysterious danger threatens the other boys, Aster knows he can help -- as a witch. It will take the encouragement of a new friend, the non-magical and non-conforming Charlie, to convince Aster to try practicing his skills. And it will require even more courage to save his family . . . and be truly himself.
Molly Ostertag grew up in the forests of upstate New York, where she spent the first half of her childhood reading about fantastical adventures and the second half acting them out with foam swords at a live action role-playing group. She currently lives in California and graduated in 2014 from the School of Visual Arts, where she studied cartooning and illustration. The Witch Boy is her middle-grade graphic novel debut.