40 Years of Madness: A History of Ride & Tie Championships (Paperback) 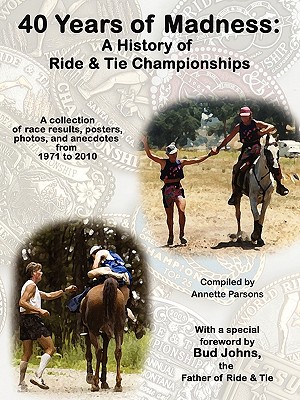 40 Years of Madness: A History of Ride & Tie Championships (Paperback)

By Annette Parsons (Compiled by)


This title is likely unavailable. Email or call for price and availability.
Forty years ago, Bud Johns, then a public relations director for Levi Straus & Company, sought a rough and tumble event to promote the company's line of rugged outdoor clothing. Little did he know that his idea of turning an historic means of transportation into a race would beget a sport that changed the lives of the thousands of people who competed. Bud's idea for a Ride and Tie race began after he had read several accounts from the 1800s and early 1900s in this country and in Europe, where two men had only one horse between them and needed to cover some distance. They opted to trade off riding and walking in order to optimize their ability to go the distance as well as the horse's. One would ride ahead on the horse an agreed-upon distance, and then tie the horse to a tree or post and continue on foot. The other man would reach the now-rested horse, mount up, and continue on to reach and pass the other man and repeat the process. In this manner, the two people and one horse eventually reached their destination quicker and in better shape than if they had both ridden the horse, or one or both walked the entire distance. The first Levi's Ride and Tie race in 1971 became an annual event that spawned hundreds of Ride and Tie competitions all over the United States and in other countries. Considered one of the most challenging and grueling of extreme sports, it continues today as the Annual World Championship Ride and Tie. For the first time, race results, posters, photos, and anecdotes from all 40 years of the sport's history are compiled here. Ride and Tie is a race like no other, where people of all ages and backgrounds are pitted against themselves and each other as they tackle challenges they never thought they could endure. The passion invoked by the sport is reflected in the stories and photos throughout this book.