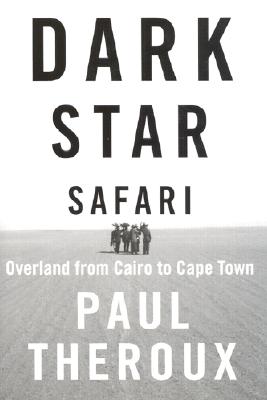 In the travel-writing tradition that made Paul Theroux’s reputation, Dark Star Safari is a rich and insightful book whose itinerary is Africa, from Cairo to Cape Town: down the Nile, through Sudan and Ethiopia, to Kenya, Uganda, and ultimately to the tip of South Africa. Going by train, dugout canoe, “chicken bus,” and cattle truck, Theroux passes through some of the most beautiful — and often life-threatening — landscapes on earth.
This is travel as discovery and also, in part, a sentimental journey. Almost forty years ago, Theroux first went to Africa as a teacher in the Malawi bush. Now he stops at his old school, sees former students, revisits his African friends. He finds astonishing, devastating changes wherever he goes. “Africa is materially more decrepit than it was when I first knew it,” he writes, “hungrier, poorer, less educated, more pessimistic, more corrupt, and you can’t tell the politicians from the witch doctors. Not that Africa is one place. It is an assortment of motley republics and seedy chiefdoms. I got sick, I got stranded, but I was never bored. In fact, my trip was a delight and a revelation.” Seeing firsthand what is happening across Africa, Theroux is as obsessively curious and wittily observant as always, and his readers will find themselves on an epic and enlightening journey. Dark Star Safari is one of his bravest and best books.

His encounters with the natives, aid workers and occasional tourists make for rollicking entertainment, even as they offer a sobering look at the social and political chaos in which much of Africa finds itself.
Publishers Weekly

No mere tale of travel mishaps....Safari is Swahili for journey, and Theroux's is truly fantastic. Library Journal Starred

Few recent books provide such a litany of Africa's ills, even as they make one fall in love with the continent.
The Washington Post

Theroux, one suspects, could be a headache to travel with; resourceful, courageous and indefatigable, as well as crusty, opinionated and contradictory. But listening to him recount his adventures... is another matter. He can make you forget to eat, this man.
The San Francisco Chronicle

Reading Theroux may make you cancel your plane tickets and settle in at home instead for a great read. The sometime novelist is at his most masterful with DARK STAR SAFARI. (A) Entertainment Weekly

Armchair travelers will wish the book went on twice as long -- and that is something, considering that the book runs more than 400 pages. This is a masterwork by a master writer.
Minneapolis Star-Tribune

The next best thing to going to Africa is to read (compulsively) this account by Paul Theroux of his overland expedition from Cairo to Capetown.
Boston Herald

[Theroux] is at his writerly best when conveying the beauty and wonder of Africa.
The Miami Herald

A gritty lesson in history, politics, aid relief and tourism; a middle-aged man's meditation on life and travel; and, above all, a masterpiece of observations that makes sense of senseless chaos and staggering wonder. Readers will be glad Therous made the trip.
Town and Country

DARK STAR SAFARI reveals the mystery of Africa, a continent of incredible disparity and resilience.
Playboy

This new travelogue ... is perhaps his most captivating work of perigrination since The Great Railway Bazaar.
The Chicago Sun-Times

Theroux is the thinking man's travel writer; in a seemingly casual, wandering fashion, he delivers a complete portrait of a continent's people, politics and economy. Bookpage

Part of "Dark Star Safari" is pure entertainment; travelogue in a grand, epic style. But Theroux also offers a sobering, contemporary look at the social and political morass in which much of Africa is mired.
Sacramento Bee

If you have even the slightest interest in Africa, travel, good writing, the modern world, the future, cities, nature, human society, love, courage--well, life in general--you are going to have to be called to the dinner table six times before you put this book down. The Chicago Tribune

I know and have traveled in Africa, so I can proclaim with admiration that Theroux, the disheveled, often grumpy, sometimes euphoric sojourner who shares his latest adventures in Dark Star Safari, is an intrepid traveler worthy of the reputation that precedes him. The Houston Chronicle

A marvel of observation.... Theroux is near faultless in his expression of material about Africa, a continent where he taught 40 years ago, and which he clearly loves.
Buffalo News

You won't find this trip advertised in travel brochures, but it's well worth taking vicariously.
Atlanta Journal Constitution

Neither a sensationalistic reveler in the pain of others, nor a hopeless romantic, Theroux chronicles a journey through an Africa full of decay and beauty, fear and joy, misery and perseverance. Denver Rocky Mountain News

Dark Star Safari is by turns hilarious and harrowing. It is an exploration of change, both in Africa -- its ruined cities, its confouding beauty -- and in Theroux's own life.
Austin Chronicle

Have no fear, Paul Theroux is as grumpy as ever. In this maddening, exhilarating, frustrating and thoroughly entertaining journey through Africa, Theroux is at his bracing best...
The Chicago Tribune

This is the most passionate and exciting of Theroux's half-dozen major travel books.
The Associated Press

[Theroux's] witty observations and obvious love and curiosity for Africa should help make this entertaining epic a yardstick for future travel writing.
The Daily Yomiuri

[Theroux's] storytelling and eye for detail are unmatched.
The Los Angeles Times

Still the dean of this genre, the irascible Theroux is the ideal companion for armchair travel.
The Los Angeles Times