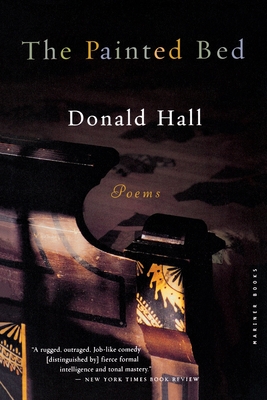 Donald Hall's fourteenth collection opens with an epigraph from the Urdu poet Faiz: "The true subject of poetry is the loss of the beloved." In that poetic tradition, as in THE PAINTED BED, the beloved might be a person or something else - life itself, or the disappearing countryside. Hall's new poems further the themes of love, death, and mourning so powerfully introduced in his WITHOUT (1998), but from the distance of passed time. A long poem, "Daylilies on the Hill 1975 - 1989," moves back to the happy repossession of the poet's old family house and its history - a structure that "persisted against assaults" as its generations of residents could not. These poems are by turns furious and resigned, spirited and despairing - "mania is melancholy reversed," as Hall writes in another long poem, "Kill the Day." In this book's fourth and final section, "Ardor," the poet moves toward acceptance of new life in old age; eros reemerges.

DONALD HALL (1928-2018) served as poet laureate of the United States from 2006 to 2007. He was a member of the American Academy of Arts and Letters and a recipient of the National Medal of the Arts, awarded by the president.