Life in Mid-Shot: A premier acting coach's tools for auditions and self-tapes (Paperback) 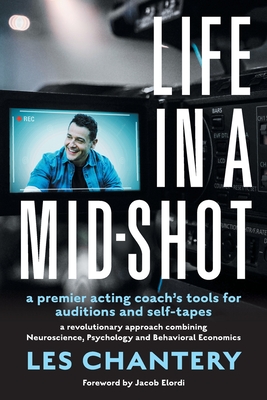 Life in Mid-Shot: A premier acting coach's tools for auditions and self-tapes (Paperback)

Actor, director, and world-renowned acting coach Les Chantery lays out an approach for the auditioning actor that has been heralded as "a revelation and unlike anything I've ever read on the topic of acting." (Matt Skrobalak, Former Senior Vice President of Casting CBS PARAMOUNT). A sure asset for any actor looking to land the part of their dreams.

Life...In A Mid-Shot is the first book of its kind to blend acting with Neuroscience, Psychology and Behavioural Economics. Les Chantery's approach has helped actors book work on platforms including NETFLIX, HBO MAX, HULU, DISNEY+, MARVEL, PARAMOUNT + and more

Foreword is written by one of Les Chantery's students, Jacob Elordi, described by GQ Magazine as "Gen Z's Leading Man" one of Hollywood's newest and brightest young stars after his performance on HBO's hit show EUPHORIA.

A Professor of Acting at the prestigious National Institute of Dramatic Art, and former actor featured alongside multiple high-profile actors, including Vin Diesel, Al Pacino, and Robert De Niro. Les Chantery's "Life...In A Mid-Shot" is a principle manual for mastering the screen audition:

◦ How to Own the Room

◦ The Science of Acting to Camera

◦ Tools to Fill Your Acting Toolbox

◦ Brain Hacks to Step Up Your Game

Actors can now source privileged content tried & tested by the Top 2% of Actors in Hollywood. Landing that Film or TV role is only one book away.