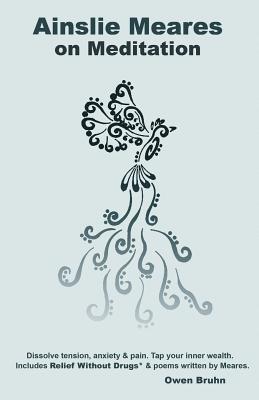 Ainslie Meares (1910-1986) was an eminent psychiatrist of international reputation who made major contributions to medical hypnosis. He melded mental homeostasis with the essence of mysticism. Dissolving tension, anxiety & pain. Taping the wealth within. Rest naturally in meditation and live a calm, active life.

"People told me what they wanted to know and I wrote Ainslie Meares on Meditation - it includes Relief Without Drugs* & sample poems written by Meares." Owen Bruhn, 2017.

"I highly recommend this book to all who aim to live and teach 'a better life'." Pauline McKinnon, invited by Meares to teach meditation 34 years ago.

Owen Bruhn BSc Hons, G Dip Occ Hyg, G Dip Erg, Dip Gov (Insp), is a health, safety and wellness practitioner. He is licenced to teach Stillness Meditation Therapy and is a (teaching) member of Meditation Australia. He is also a Primal Health Coach and utilises the principles of the Egoscue method.

His second book, A Key To The Books of Ainslie Meares, is soon to be published. He is currently working on a third book that integrates Meares' method with core ideas of the evolutionary health movement.

Bruhn lives with family and dogs in Melbourne. As a child he was interested in eastern arts (tai chi, yoga etc) and the outdoors. www.mearesbook.com.au *distilled version