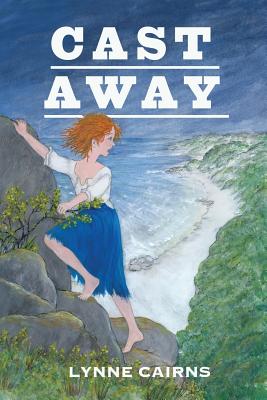 Cast Away is a girls' adventure story that has everything: shipwreck, remote survival, encounters with strange animals, cross-cultural friendship, buried treasure, evil villains, kidnapping, threats of torture, all against the stunning backdrop of Western Australia's rugged south coast and virgin forests.

Katie O'Donoghue, an eleven-year-old Irish servant girl, is the sole survivor of a shipwreck on an unexplored part of the south coast of Western Australia in 1834. After days alone, she finds refuge with Captain Featherby, a retired sea captain who has been a pirate in his youth. He dies after a bashing by sealers (some escaped convicts), who believe he has buried treasure and that she knows where it's buried. She doesn't

Escaping, she wanders for days and is near death when rescued by Aboriginal people.She stays with them, learning about their language and culture, makes friends with a girl her own age and begins to feel accepted, but the sealers harass her friends while trying to capture her and the elders decide she should be with her own people. A trio of white explorers take her to Albany to live with widowed tavern-keeper Mrs. Robinson.

Katie makes new friends and learns her way around the little settlement. When her Aboriginal friends come to Albany, she is completely happy. Then, the sealers arrive, as does Captain Featherby's old ship, the Providence. The crew are intending to visit him until Katie tells them he how he died.

Now, abducted by the sealers, Katie is taken her back to Featherby's camp in an open whaleboat. At an overnight stop, she escapes, but is recaptured and threatened with torture unless she reveals where the treasure is hidden.

In desperation, she remembers a possible hiding place. The sealers find the treasure, but Katie is rescued by her Aboriginal friends and the crew of the Providence and it is retrieved. In accordance with Captain Featherby's will, the riches are divided between the crew, but Katie also receives a share.

She sails back to Albany on the Providence and uses her share of the treasure to help Mrs. Robinson build a new tavern.

The target audience is the 10 to 14-year-old competent reader, though it may also appeal to young adults. With a female protagonist, this book is aimed at filling a perceived gap in the offerings available to young girls who may have tired of fantasy but retain a taste for adventure.