The Light of Asia: The Poem that Defined The Buddha (Hardcover) 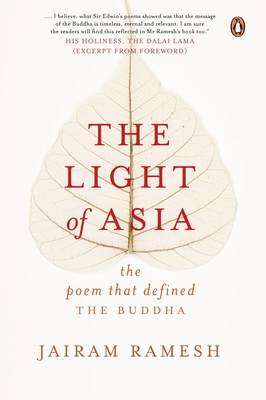 The Light of Asia: The Poem that Defined The Buddha (Hardcover)

By Jairam Ramesh, His Holiness the Dalai Lama (Foreword by)

The Light of Asia is an epic poem by Sir Edwin Arnold that was first published in 1879. It is a narrative of the life and message of the Buddha. It quickly became a huge sensation and has continued to resonate powerfully across the world over the last century and a half. The poem captivated an Indian monk who remains an iconic personality—Swami Vivekananda. At about the same time, it deeply moved a young man in Colombo who has become famous in history as Anagarika Dharmapala. It caught the attention of an aspiring Indian lawyer in London in 1889. This man later became immortal as Mahatma Gandhi. A few years hence it impacted a teenager in Allahabad who would, in 1947, become the first Prime Minister of India—Jawaharlal Nehru. Two copies of the book adorned the bookshelves of B.R. Ambedkar, the prime architect of the Indian constitution.

Weaving together literary, cultural, political, and social history, Jairam Ramesh uncovers and narrates the fascinating story of this deeply consequential and compelling poem that has shaped our thinking of an ancient sage and his teachings.

Jairam Ramesh brings into this unusual narrative the life of the multi-faceted poet himself who, among other things, was steeped in Sanskrit literature. Sir Edwin Arnold’s English rendering of the Bhagavad Gita was one of Mahatma Gandhi’s abiding favourites. Sir Edwin was also in many ways the man who shaped Bodh Gaya as we know it today.

Jairam Ramesh, a Rajya Sabha MP, was Union minister between 2006 and 2014, holding several key portfolios including environment and forests. He is the author of several well-known books including Indira Gandhi: A Life in Nature and Intertwined Lives: P.N. Haksar and Indira Gandhi.