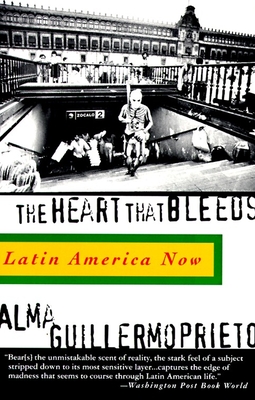 
This title is likely unavailable. Email or call for price and availability.
An extraordinarily vivid, unflinching series of portraits of South America today, written from the inside out, by the award-winning New Yorker journalist and widely admired author of Samba.
Alma Guillermoprieto writes frequently for the New Yorker and the New York Review of Books. She is the author of Looking for History, The Heart That Bleeds, and Samba, and she was named a MacArthur Fellow in 1995. Raised in Mexico and the United States, she now makes her home in Mexico City.
"Powerful...a literary gem...wonderfully written dispatches that capture the richness and intensity of Latin America's reality. Those wanting a feel for the spirit of Latin America or what lies behind the headlines will hardly find more vivid accounts of the region's recent history."--The Miami Herald

"The Heart That Bleeds is the work of a master...Guillermoprieto has brought back reports that are unforgettable, brave in their clearsightedness, but unstinting, too, in their passion and sympathy. The countries of Latin America now have their Orwell."--David Remnick