In Retrospect: The Tragedy and Lessons of Vietnam (Paperback) 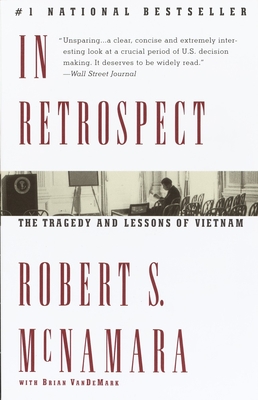 In Retrospect: The Tragedy and Lessons of Vietnam (Paperback)


This title is likely unavailable. Email or call for price and availability.
#1 NATIONAL BESTSELLER. The definitive insider's account of American policy making in Vietnam.

"Can anyone remember a public official with the courage to confess error and explain where he and his country went wrong? This is what Robert McNamara does in this brave, honest, honorable, and altogether compelling book."—Arthur Schlesinger, Jr.

Written twenty years after the end of the Vietnam War, former Secretary of Defense Robert McNamara's controversial memoir answers the lingering questions that surround this disastrous episode in American history.

With unprecedented candor and drawing on a wealth of newly declassified documents, McNamara reveals the fatal misassumptions behind our involvement in Vietnam. Keenly observed and dramatically written, In Retrospect possesses the urgency and poignancy that mark the very best histories—and the unsparing candor that is the trademark of the greatest personal memoirs.
Includes a preface written by McNamara for the paperback edition.
Robert S. McNamara was secretary of defense under Presidents Kennedy and Johnson, president of the Ford Motor Company, and president of the World Bank. After leaving the World Bank he was active in economic development efforts across the globe and in the arms control and non-proliferation movements. He died in 2009.