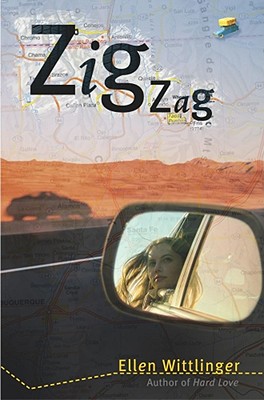 
This title is likely unavailable. Email or call for price and availability.
Robin can't believe it when her boyfriend, Chris, tells her that his parents have enrolled him in a summer program in Rome. It's their last summer together before he goes away to college, and now they won't even have that time together. It feels like the worst thing that's ever happened to her.
Since Chris is leaving, Robin agrees to join her aunt and cousins on a cross-country road trip, in spite of her reservations -- she and her younger cousins have never really gotten along, and since their father's death they've become even more problematic than before.
Soon the four of them are zigzagging through the West on an eye-opening journey. They explore parts of the country Robin never dreamed existed -- and she discovers inner resources she never imagined she had.
Ellen Wittlinger was the critically acclaimed author of the teen novels Parrotfish, Blind Faith, Sandpiper, Heart on My Sleeve, Zigzag, and Hard Love (an American Library Association Michael L. Printz Honor Book and a Lambda Literary Award winner), and its sequel Love & Lies: Marisol’s Story. She earned a bachelor’s degree from Millikin University in Decatur, Illinois, and an MFA from the University of Iowa. A former children’s librarian, she passed away in November 2022 at the age of seventy-four.