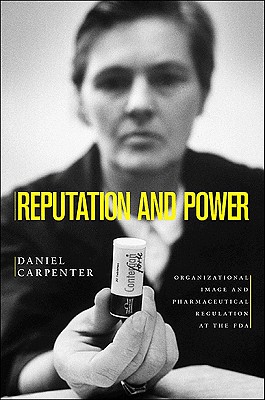 This is book number 137 in the Princeton Studies in American Politics: Historical series.

How the FDA became the world's most powerful regulatory agency

The U.S. Food and Drug Administration is the most powerful regulatory agency in the world. How did the FDA become so influential? And how exactly does it wield its extraordinary power? Reputation and Power traces the history of FDA regulation of pharmaceuticals, revealing how the agency's organizational reputation has been the primary source of its power, yet also one of its ultimate constraints. Daniel Carpenter describes how the FDA cultivated a reputation for competence and vigilance throughout the last century, and how this organizational image has enabled the agency to regulate an industry as powerful as American pharmaceuticals while resisting efforts to curb its own authority. Carpenter explains how the FDA's reputation and power have played out among committees in Congress, and with drug companies, advocacy groups, the media, research hospitals and universities, and governments in Europe and India. He shows how FDA regulatory power has influenced the way that business, medicine, and science are conducted in the United States and worldwide. Along the way, Carpenter offers new insights into the therapeutic revolution of the 1940s and 1950s; the 1980s AIDS crisis; the advent of oral contraceptives and cancer chemotherapy; the rise of antiregulatory conservatism; and the FDA's waning influence in drug regulation today. Reputation and Power demonstrates how reputation shapes the power and behavior of government agencies, and sheds new light on how that power is used and contested.
Daniel P. Carpenter is the Allie S. Freed Professor of Government at Harvard University. He is the author of The Forging of Bureaucratic Autonomy: Reputations, Networks, and Policy Innovation in Executive Agencies, 1862-1928 (Princeton).