Along Came Google: A History of Library Digitization (Hardcover) 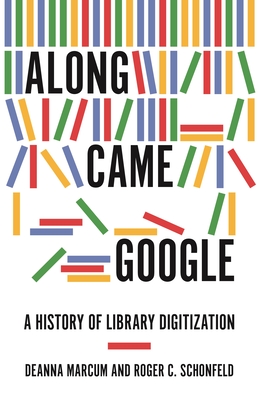 Along Came Google: A History of Library Digitization (Hardcover)

Libraries have long talked about providing comprehensive access to information for everyone. But when Google announced in 2004 that it planned to digitize books to make the world's knowledge accessible to all, questions were raised about the roles and responsibilities of libraries, the rights of authors and publishers, and whether a powerful corporation should be the conveyor of such a fundamental public good. Along Came Google traces the history of Google's book digitization project and its implications for us today. Deanna Marcum and Roger Schonfeld draw on in-depth interviews with those who both embraced and resisted Google's plans, from librarians and technologists to university leaders, tech executives, and the heads of leading publishing houses. They look at earlier digital initiatives to provide open access to knowledge, and describe how Google founders Sergey Brin and Larry Page made the case for a universal digital library and drew on their company's considerable financial resources to make it a reality. Marcum and Schonfeld examine how librarians and scholars organized a legal response to Google, and reveal the missed opportunities when a settlement with the tech giant failed. Along Came Google sheds light on the transformational effects of the Google Books project on scholarship and discusses how we can continue to think imaginatively and collaboratively about expanding the digital availability of knowledge.
Deanna Marcum (1946-2022) was senior advisor at Ithaka S+R and served as associate librarian for library services at the Library of Congress from 2003 to 2011. Roger C. Schonfeld is vice president of libraries, scholarly communication, and museums at Ithaka S+R.