Identity Crisis: The 2016 Presidential Campaign and the Battle for the Meaning of America (Hardcover) 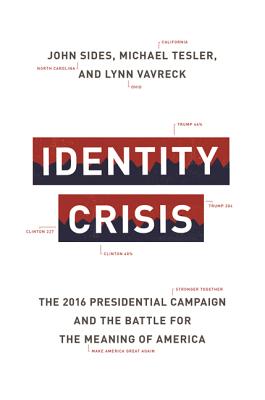 Identity Crisis: The 2016 Presidential Campaign and the Battle for the Meaning of America (Hardcover)

Donald Trump's election victory stunned the world. How did he pull it off? Was it his appeal to alienated voters in the battleground states? Was it Hillary Clinton and the scandals associated with her long career in politics? Were key factors already in place before the nominees were even chosen? Identity Crisis provides a gripping account of the campaign that appeared to break all the political rules--but in fact didn't. Identity Crisis takes readers from the bruising primaries to an election night whose outcome defied the predictions of the pollsters and pundits. The book shows how fundamental characteristics of the nation and its politics--the state of the economy, the Obama presidency, and the demographics of the political parties--combined with the candidates' personalities and rhetoric to produce one of the most unexpected presidencies in history. Early on, the fundamental characteristics predicted an extremely close election. And even though Trump's many controversies helped Clinton maintain a comfortable lead for most of the campaign, the prediction of a close election became reality when Americans cast their votes. Identity Crisis reveals how Trump's victory was foreshadowed by changes in the Democratic and Republican coalitions that were driven by people's racial and ethnic identities. The campaign then reinforced and exacerbated those cleavages as it focused on issues related to race, immigration, and religion. The result was an epic battle not just for the White House but about what America is and should be.
John Sides is professor of political science at George Washington University. Michael Tesler is associate professor of political science at the University of California, Irvine. He is the author of Post-Racial or Most-Racial?: Race and Politics in the Obama Era. Lynn Vavreck is the Marvin Hoffenberg Professor of American Politics and Public Policy at the University of California, Los Angeles. She is the author, with John Sides, of The Gamble: Choice and Chance in the 2012 Presidential Election (Princeton).