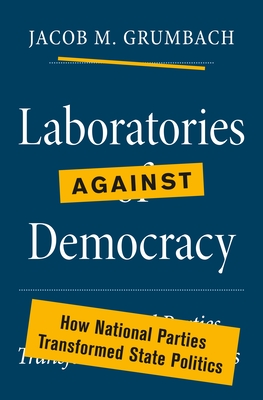 As national political fights are waged at the state level, democracy itself pays the price

Over the past generation, the Democratic and Republican parties have each become nationally coordinated political teams. American political institutions, on the other hand, remain highly decentralized. Laboratories against Democracy shows how national political conflicts are increasingly flowing through the subnational institutions of state politics--with profound consequences for public policy and American democracy. Jacob Grumbach argues that as Congress has become more gridlocked, national partisan and activist groups have shifted their sights to the state level, nationalizing state politics in the process and transforming state governments into the engines of American policymaking. He shows how this has had the ironic consequence of making policy more varied across the states as red and blue party coalitions implement increasingly distinct agendas in areas like health care, reproductive rights, and climate change. The consequences don't stop there, however. Drawing on a wealth of new data on state policy, public opinion, money in politics, and democratic performance, Grumbach traces how national groups are using state governmental authority to suppress the vote, gerrymander districts, and erode the very foundations of democracy itself. Required reading for this precarious moment in our politics, Laboratories against Democracy reveals how the pursuit of national partisan agendas at the state level has intensified the challenges facing American democracy, and asks whether today's state governments are mitigating the political crises of our time--or accelerating them.
Jacob M. Grumbach is assistant professor of political science at the University of Washington. Twitter @JakeMGrumbach