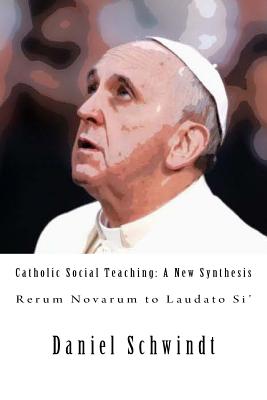 
Available in Warehouse. Wait for Email Confirmation for ETA
This book cannot be returned, cancelled, or exchanged. Please call for availability and pricing
As classroom reading material or for casual reference, this versatile text provides a comprehensive yet concise analysis of Catholic social doctrine, after the vision of Pope Francis: "We need to develop a new synthesis capable of overcoming the false arguments of recent centuries. Christianity, in fidelity to its own identity and the rich deposit of truth which it has received from Jesus Christ, continues to reflect on these issues in fruitful dialogue with changing historical situations. In doing so, it reveals its eternal newness." from the encyclical letter Laudato Si']Pope Francis' ground-breaking encyclical letter on the environment caught the attention of the world. Many observers were surprised to see the Catholic Church addressing such topics. Others perhaps wondered: what is an encyclical anyway?What Pope Francis' latest major statement has also brought into public view is the long and powerful tradition of Catholic reflection on society and its arrangements-economic, political, social and now environmental-known as Catholic social teachings, the "unexploded dynamite of the Church," as Catholic social activist Peter Maurin once put described them. In their modern form, these documents date from Pope Leo XIII's Rerum Novarum (1891) and continue down through the papacies of St. John Paul II, Pope Emeritus Benedict XVI, and Pope Francis.In answer to the pope's call for "a new synthesis" comes this highly accessible work. Author Daniel Schwindt also supplies a brief but succinct historical background for this remarkable and influential series of reflections on war and peace, social justice, economics and property, and much more.